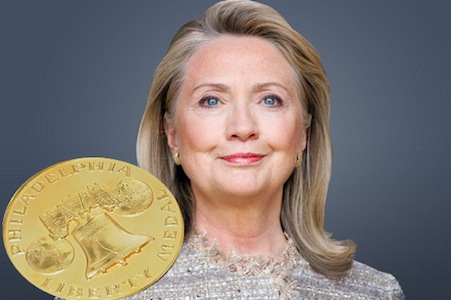 When I got word that Jeb Bush will honor Hillary Clinton with the Liberty Award, I could only imagine that we now are giving awards to politicians who get people killed. Holy Ben Ghazi!

It seems that no matter how incompetent you are in DC, there is an award for you.

Get four people killed while on your watch, “Here’s your Liberty Medal!”

As The Hill reported:

“Former Secretary Clinton has dedicated her life to serving and engaging people across the world in democracy,” Bush said in a statement announcing the award. “These efforts as a citizen, an activist, and a leader have earned Secretary Clinton this year’s Liberty Medal.”

A leader? Hillary Clinton has left the world a far more dangerous place, than when she became Secretary of State. She was wholly ineffective in her role, unless making America the laughing stock of the world counts.

If America were not the new Bizarro World, Hillary Clinton and most of Obama’s staff would be in prison, yet here they are being HONORED with awards. No wonder “everybody gets a trophy” with Liberals.

And I have no idea why Jeb Bush has decided to publicly spoon with Hillary, but that shows us why he should never be president. Do we not have any principled politicians left?