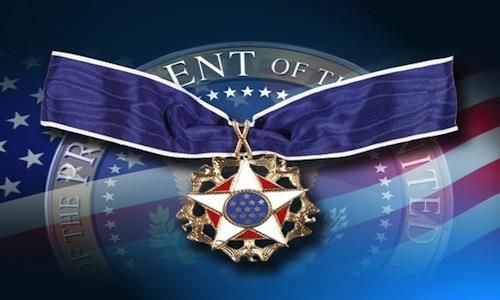 On the 50th anniversary of President Kennedy’s establishment of the Presidential Medal of Freedom, Barack Obama, the guy who’s done more to obstruct freedom than any American president in history, will be the one handing out the medals.

Having Barack Obama dispense freedom medals is on par with Hitler lighting Shabbat candles or Bill Clinton hosting a couples’ seminar on the joys of marital fidelity.

Nonetheless, according to the White House website, the purpose of the Presidential Medal of Freedom, which is the nation’s highest civilian honor, is to pay tribute to those who’ve made “meritorious contributions to the security or national interests of the United States, to world peace, or to cultural or other significant public or private endeavors.”

President Obama had this to say about the Medal of Freedom:

The Presidential Medal of Freedom goes to men and women who have dedicated their own lives to enriching ours. This year’s honorees have been blessed with extraordinary talent…