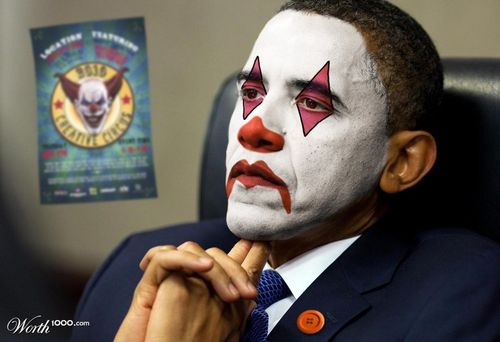 Let me begin by saying that these are the sage words of my good friend and radio mentor, Dave Perkins.

Dave discusses what’s really happening behind the curtain in the rodeo clown incident, and it’s truly frightening, when you think about it. Below are Dave’s thoughts:

Tuffy Gessling, the rodeo clown with the Obama mask, has found out about life in a de facto dictatorship.

All around him, people in positions of authority are flinching, recoiling, running away, and tossing everyone under the bus, not because Obama’s gang actually threatened them, but because the Obama gang carries that idea around with them. On purpose.

The use of the IRS against political opponents, the thuggery of the DOJ, the lawlessness of every agency in government, the way they talk when they think nobody’s listening (remember the regulator, Alberto Armendariz, talking about the oil business in Texas, saying they need to “crucify the first few”, like the Romans, so the rest will know they’re serious?)

Anyone observing with a clear eye will see; this administration “punishes its enemies” (Obama, talking to Hispanics about politics a few years back). This administration uses the levers of power against political opposition. And it most definitely uses the slightly darker skin of the only actual African-American in politics as insulation; do ANYTHING other than praise and respect Obama, and you are automatically a racist.

The Missouri bureaucracy of rodeo has shown us, if we care (or dare) to look, what we are; a dictatorship, already so far gone that nobody will even stand for TEN SECONDS in favor of freedom of speech or common sense.

A clown is a clown, and masks of the president are a staple of American comedy for longer than I have been alive. But the rules are different now.

We have a “dear leader”.