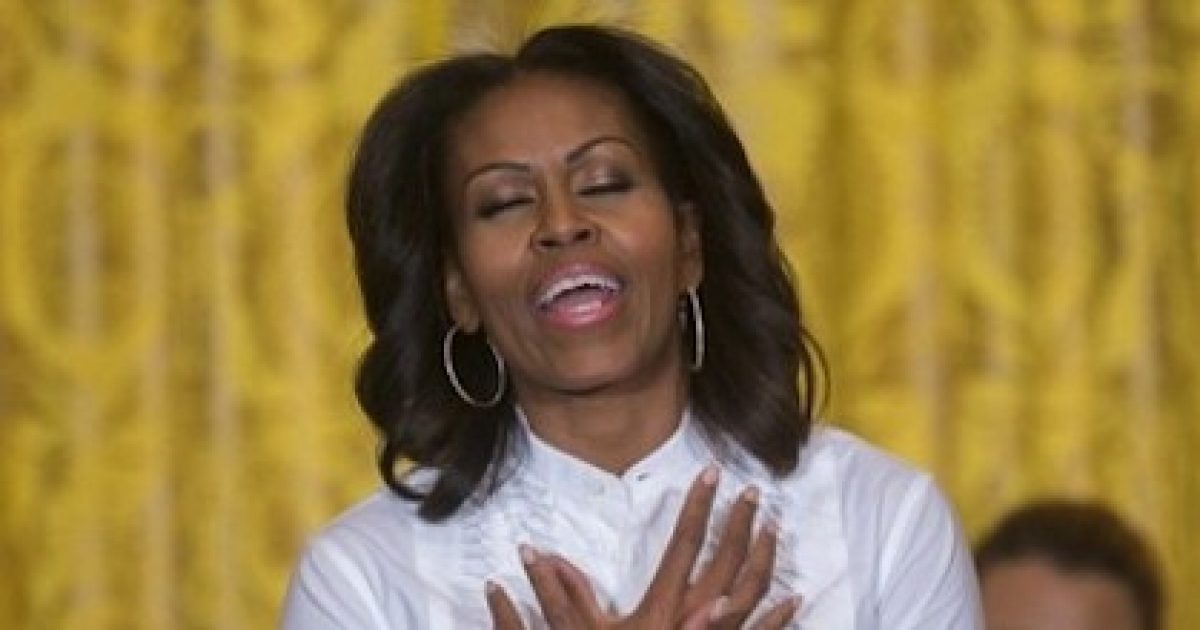 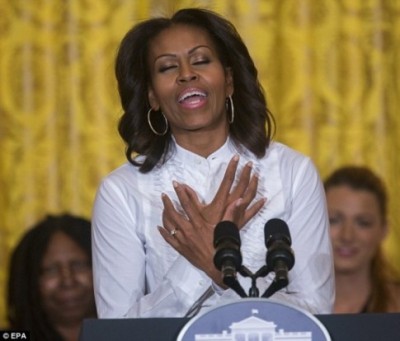 Fresh off of Diwali Bollywood dancing in the State Room, Michelle ‘Priorities in Order’ Obama hosted a “first ever” Careers in Film Symposium at the White House.

This at a time when four million panicked Americans who’ve been kicked to the curb by their health insurance companies were trying to figure out how to pay for policies with fewer options that cost more.

During the mini-seminar, Mrs. Obama discussed some of the stars’ claws to fame.

Adding color to the event, Mrs. Obama unwittingly provided new insight into Whoopi Goldberg’s  liberal leanings when she explained that as a result of the talk show host’s dyslexia, “there were people again and again who would call her dumb. They would call her slow.” Ah ha!

Things got so real that at one point, Michelle told the students to “own it” and to “shake it off.” She even discussed Harvey Weinstein’s missing eyeball, which sent the message, ‘if Harvey can raise a ton of money for Democrats with one eyeball, so can you!’

The purpose of the conference was to give false hope to students, most of whom, thanks to Barack Obama, will never get a job, let alone break into show business.

Also thanks to Barack Obama,  cancer patients were being abruptly unhooked from their chemo bags.  Meanwhile, Harvey Weinstein and company were talking to students about:

[c]areers in film and an opportunity to learn about animation, special effects, makeup, costume, directing, music and sound effects, as well as hear from leaders in the film industry about how their education helped them succeed.

Remember that famous fly that always lands on Obama’s face in the East Room?  This time it had something more appropriate to land on during the “education helped them succeed” portion of the festivities, because a few of the successful stars that ‘education helped succeed’ never even went to college.

Alan Menken talked about and shared some music from his musical score for Beauty and the Beast.  Mr. ‘Brown Nose’ Menken, exhibiting a hearty flair for the fictional, used some fantastical wordplay when he called Mr. and Mrs. Obama (ahem) “Beauty and the Chief.”

As for effusive ‘Belle of the Ball’ Michelle, well, she let on that the acting bug must have bit her when she awarded the Oscar for Best Picture to Ben Affleck for Argo. Ergo, when not spending her time dreaming up ways to impose her will on a resistant American public, it seems Mrs. Obama may spend a lot of time standing  in front of a full length mirror convincing herself, “I could have been a contender.”

After listening to Menken talk about the score to Beauty and the Beast, Mrs. Obama, aka the “Beauty,” in a very melodramatic and animated way, with eyes closed and hands crisscrossed over her heart,  told the enchanted crowd she was inspired to rush upstairs and slip on one of her $10,000 haute couture ball gowns.

Then, the First Whirling Dervish told her rapt audience that just the thought of Beauty and the Beast moves her, in a “Let’s Move!” way, in that ball gown, to “twirl and twirl.”  Luckily for her, if she twirls herself into a state of nausea and loses her lunch, at least she’s covered by Obamacare.

Speaking of Obamacare, be it a Beauty and the Beast or a “Beauty and the Chief,” Mrs. Obama’s “twirl and twirl” sentiments were very apropos, because a ‘twirling’ beachball is what Mac users are experiencing when they try to log on to an Obamacare enrollment site.

As for everybody else, well, they’re ‘twirling’ their thumbs while trying to enroll on an Exchange.  So the notion of ‘twirling’ is very timely.

Then, speaking to a roomful of people her husband has piled thousands of dollars of debt upon, and who will remain on their parent’s health insurance until middle age, the first lady urged everyone to get an education, which she probably doesn’t realize would require most of them to take out a student loan.

Michelle Obama encouraged the more ambitious young thespian types to continue “chasing their dreams in film, but to never forget the importance of education and the ability to overcome adversity.”

What she didn’t say was whether that “adversity” will be delivered compliments of the Beauty’s Beast… er, I mean Beauty’s Chief.