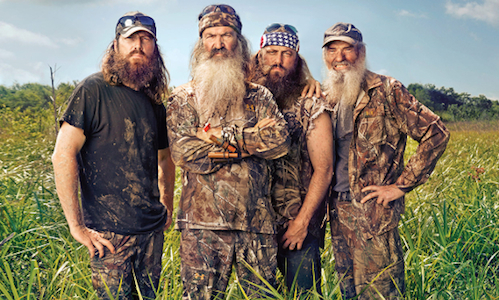 One week and two days after announcing its sanction against Phil Robertson for his comments calling homosexuality a sin, A&E announced today the Duck Dynasty Patriarch will be reinstated in the new season.

The GQ interview made headlines around the nation and sparked an uproar amongst millions of Duck Dynasty/Robertson family fans. The Robertson family have built a multi-million dollar enterprise from Phil’s duck call business, Duck Commander.

Originally A&E may have envisioned the show as a quirky reality show about a Louisiana family enamored with camo and duck hunting. But what the artsy A&E power brokers conceived as a spoof, became the highest rated reality show of all time, drawing an audience of 11+ million viewers.

Americans fell in love with the duck hunting family and their humor and biblical values. And every nuance that A&E thought would be a loser — no cussing, squeaky clean values, hunting and skinning animals, praying in Jesus’ name — actually did the opposite! People of faith flocked to the show!

In an era where most so-called comedies are devoid of real humor and often showcase abnormal and perverse family structures, the Robertson clan is intact and overflowing with clean humor and faith.

“While Phil’s comments made in the (GQ) interview reflect his personal views based on his own beliefs, and his own personal journey, he and his family have publicly stated they regret the ‘coarse language’ he used and the misinterpretation of his core beliefs based only on the article. He also made it clear he would ‘never incite or encourage hate.’”

“Duck Dynasty is not a show about one man’s views. It resonates with a large audience because it is a show about family, a family that America has come to love. As you might have seen in many episodes, they come together to reflect and pray for unity, tolerance and forgiveness. These are three values that we at A&E Networks also feel strongly about.

Reaction to the A&E hiatus announcement was fast and furious. The Facebook page, Boycott A&E Until Phil Robertson Is Put Back On Duck Dynasty, accrued 1.5 million “Likes” within 2 days as outraged viewers by the thousands weighed in.

The hashtag, #StandWithPhil, trended on Twitter. In a move that may have surprised A&E, sponsors of Duck Dynasty, Under Armour and Skyjacker Suspension, firmly stood with Phil Robertson and refused to bow to the hyper-sensitivities of the GLAAD Nazis.

Lonnie McCurry, Skyjacker CEO, confirmed that Skyjacker and its advertising dollars would follow Phil Robertson should he and the Robertson clan depart A&E.

The an official Skyjacker statement:

And the GQ article? Drew Magary’s hit piece on Phil Robertson is so infused with profanity it belies the periodical’s name,”Gentleman’s Quarterly.” There was a time in America when a gentleman would not make a habit of peppering his speech and writing with curse words. Magary, obviously, was NOT from that time and approached the interview an agenda.

A&E scheduled the interview and had a representative on hand during the interview. Which begs the question: why allow a now-progressive, slick magazine writer to pen a piece about a man who stands on timeless, biblical values?

The interview was a clash of culture waiting to happen, and orchestrated by A&E publicists/marketing folks.

Whatever the intended results, it was NOT what the Disney/Hearst-owned channel execs envisioned. A&E suspended Phil after his comments admitting a preference for intimacy with women over men, and then listing homosexuality in a line-up of sins. Phil was loosely referencing 1Corinthians 6:9-10:

And Americans, for 9 days rose up and entered the great battle between those power-brokers in the entertainment industry who are pushing a rabidly pro-gay agenda, and the people of faith in this nation.

A&E has capitulated, GLAAD is most likely livid, and Phil Robertson, a good and godly man, has been justified.

But even more significant, if only for a time, America chose to champion a man standing on the transcendent truth of the Bible. En masse, we held fast to God’s Word and the Constitution.

And to think it was the Louisiana Duck Commander leading us through the Progressive wilderness. Happy, happy happy!