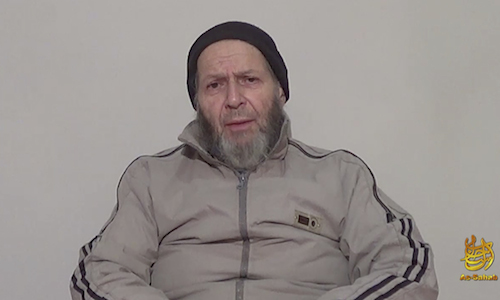 My good friend and prolific op-ed writer, Jeff Dunetz, alerted me to this story. But it’s not just any story: this is the true narrative of a good man who, as a Poly-Sci Prof, was Jeff’s mentor in college.

Please read and pass on to everyone you know — perhaps public outcry can elicit action from our otherwise feckless president.

Seventy-two year old Warren Weinstein has been held by the al-Qaeda terrorists since mid-August 2011.

On Wednesday Al Qaeda released a video where Dr. Weinstein asks President Obama to negotiate his release. We know that he was alive when the video was made, but we don’t know when it was made and whether or not he is still alive.

While it has been reported in the mainstream media, their stories lack any sort of heart.

Warren Weinstein is a human being, a good one at that. He is one of the people most responsible for tuning me into a political geek.

Warren Weinstein looked ashen and sounded lethargic as he pleaded for renewed interest in his case and asked the U.S. government to consider releasing al-Qaeda militants in its custody. The 72-year-old development expert from Rockville, Md., began his address by urging President Obama to step up efforts to get him released.

“You are now in your second term as president of the United States and that means that you can take hard decisions without worrying about reelection,” said Weinstein, who was recorded sitting against a white wall wearing a gray tracksuit top and a black woolen hat. No one else appeared in the video.

Read full story at The Lid