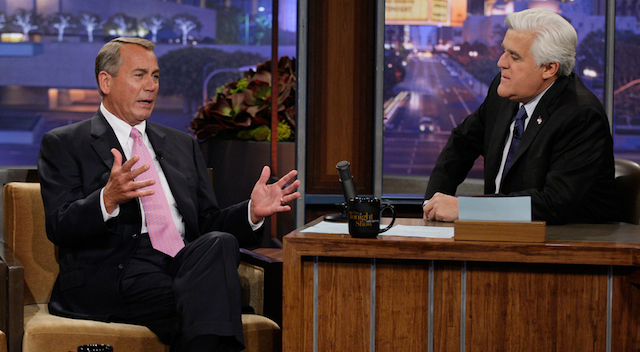 Why is America dire straits? The answer was revealed when Speaker of the House John Boehner (pronounced BAY-ner) finally appeared on The Tonight Show with Jay Leno.

The guy with the perpetual cottonmouth took to Jay’s couch to spout off on people like Chris Christie, Jeb Bush, and Vladimir Putin. But the real revelations came when Boehner explained why he refuses to do anything to counterbalance Obama!

It started when Jay Leno leaned in and asked the Speaker, “Ever think of running for president?”

“No!” Boehner shot back.

Then came the big reveal, the peek into what Barack Obama has on Mr. Boehner that keeps John on the president’s good side.

“Listen, I like to play golf, I like to cut my own grass, I do drink red wine, I smoke cigarettes–and I’m not giving that up to be president of the United States.”

Whoa Nellie!  You mean that’s all it takes to get 64-year-old Boehner to sell out America to tyranny – a golf cart, a riding mower, a case of Ripple, and…