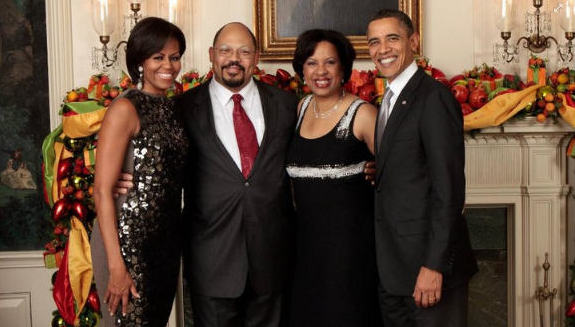 This picture of the First Couple and the CGI Veep and hubby was posted on Toni Townes-Whitley’s Facebook page, and quickly went viral in the interwebs.

Now an email describing the folly and the rest of the story is circulating like mad. But just in case you’ve not seen it, read on.

Michelle Obama’s Princeton classmate is a top executive at the company that earned the no-bid contract to build the disastrous Obamacare website.

Toni Townes-Whitley, Princeton class of ’85, is senior vice president at Canadian company CGI Federal, which was awarded the no-bid contract to build the Obamacare enrollment website at Healthcare.gov, which so far has cost $678 million.

Townes-Whitley and her Princeton classmate, Michelle Obama, are both members of the Association of Black Princeton Alumni.

Toni Townes, Princeton ’85, is a onetime policy analyst with the General Accounting Office and previously served in the Peace Corps in Gabon, West Africa.

Soooooo…Let’s see if we can connect the dots here:

7)  CGI has continued its practice of overruns as the Obamacare enrollment website has gone from $98 million to costing U.S. Tax payers $678 million, and it’s still going up.

Pretty telling. The more America knows about Barack and Michelle Obama, the less truly American the First Couple appear to be, birth certificates not withstanding.

Any American president who consistently criticizes the US abroad, consistently cavorts with dictators and Muslim autocrats, and, contrary to the Republic’s system of checks and balances, declares law by fiat, is no true American.

I’m sorry, but if I handed a huge contract to someone, who subsequently utterly failed and squandered $678 million of We the People’s hard-earned money, I would not be palling it up and mugging for the camera.

Michelle and Toni, you got some splainin’ to do!