These two pictures say it all: Hillary, staging her Russian Reset fantasy, belied by abject failure in Crimea’s Lenin Square.

I’ll tell you how – President Barack Obama and Hillary Clinton did it after Obama was elected to demonstrate that Obama was right and how he was now in control. 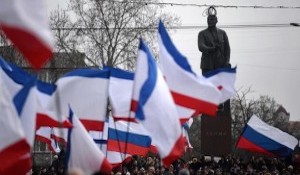 They wanted you to see with your own eyes that the world really is a safe place now, so no need for all those messy military weapons, plans or budgets.

They wanted to make fools of people like Mitt Romney, who warned that the Russians were “our No. 1 geopolitical foe.”

And of Sarah Palin, who predicted that Obama’s approach “would only encourage Russia’s Putin to invade Ukraine next.