Mind blown! The Grammy’s and most of the entertainment world is anti-Trump or so they say. But not Joy Villa.

According to the LA Times,

Singer-songwriter Joy Villa chose to get political on the red carpet with a red, white and blue, bedazzled “Make America Great Again” dress. To those unfamiliar with the campaign slogan, the back of Villa’s dress makes it quite clear, with bold letters spelling out the name of the man who helped coin the MAGA slogan,  “Trump.”

Or will Villa set a trend that many Conservatives predict will come soon? Trump-Mania!

Currently the entertainment world lives on the muscle-memory of showing love only for their former messiah. But while Barack Obama vacations with billionaires, the sand foundation erodes from beneath the feet of Hollyweirdos.

Celebrities live charmed lives, but their families don’t. When they are grounded by Mom and Dad, the cousin in prison, and the sister who got knocked up by the ex-brother-in-law, things get real. 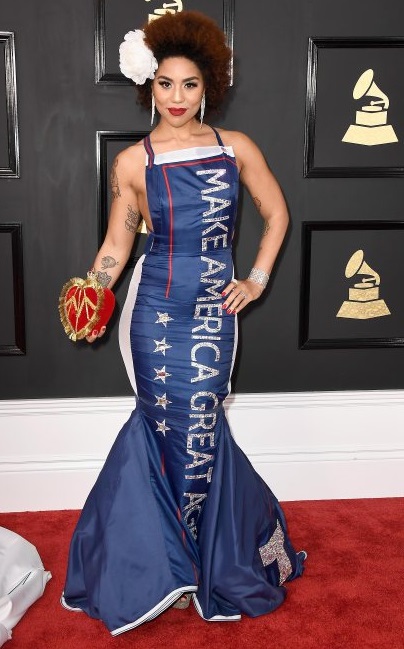 Villa wrote about the Grammy experience on her Instagram:

“My whole artistic platform is about LOVE! I couldn’t be where I am today without the love and tenderness of those beautiful supporters and friends around me. Thank you I hope you enjoy tonight’s @grammysawards2017 and remember to forget your problems and focus on your future! You are infinite and beautiful and no one can stop you but you. So go out and celebrate yourself as a winner no matter what, together with those you adore!”

The performer, who was not nominated at the show and was one of the first guests to arrive, initially walked the red carpet outside of Los Angeles’ Staples Center in a white cape. She then did a dramatic costume change, whipping off the draped fabric to reveal a form-fitting red-white-and-blue dress emblazoned with President Donald Trump’s signature slogan.

Some say Villa wore the Trump dress for attention.

If so, she accomplished what she wanted. She got my attention, and likely the attention of millions of others who didn’t know her.