The 43rd president forced a reality check on Matt Lauer of NBC’s The Today Show. He passively-aggressively took the liberal host to task for self-importance is must-see entertainment.

In a recent interview, Matt Lauer tried to bait former President George W. Bush into criticizing President Trump on a number of issues. Left-wing bias dripped from every Lauer question. The first question focused on divisions in America.

“You took office in 2001 after an extremely contentious election. The nation was incredibly divided. How would you compare the divisions we faced then, to what we’re living through right now?”

Deflecting Lauer’s obvious attempt to pit the former Republican president against the current one, Bush answered:

“You know it’s hard to compare times. One thing, though, is for certain. The job is a tough job. Everybody looks at the presidency when they campaign one way. Then they get in office and find out there’s a reality to the job. There’s been times when we’ve been divided. … It requires a lot of people coming together to try and to make us united.”

The mainstream media doesn’t willingly acknowledge the divisive political culture in America cannot be repaired by one person. 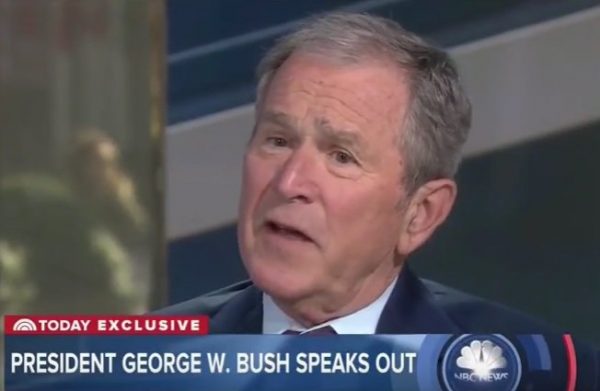 “But there’s enormous division right now. And although President Trump has said he hopes to unify the country, have you, in the first month, seen him do or say anything that, in your opinion, would be an attempt to heal the wounds of the election?”

“Well first of all, there’s only been one month in office. And … he’s got four years. Secondly, I think you have to take the man at his word that he wants to unify the country. And we’ll see whether he’s able to do so. It’s hard to unify the country, though, with the news media being so split up. When I was president, you know, you mattered a lot more, because there was like, three of you. And now, there’s all kinds of information being bombarded out…people can say things anonymously. And, it’s just a, it’s a different world.”

The former heavyweights of news have been rendered irrelevant. We now live in a world of thousands of news sites, and 24-hour cable news. That’s the reality.

Does the liberal media honestly expect Trump to fix everything, one month in? In truth, Trump has accomplished more in his first month than any president in modern history, including Reagan. He has not shirked responsibility or backed away from any campaign promise to date.

In what the world considered the least likely presidential victory, perhaps in history, Trump works to his mandate. Make America great again is more than a slogan, but a calling. In accomplishing that mission, everybody benefits, including President Trump’s detractors.

For the president, the healing has begun. He recently focused on education, bringing over a dozen black educators to discuss more funding for HBCUs. The media was silent, except for Kellyanne Conway’s seat on the sofa.

Another recent announcement heralded jobs to be created by Exxon, and the media reports this on page 18 of the “Lifstyle” section.

Democrat Elijah Cummings, who boycotted the inauguration is among many members of the Congressional Black Caucus who refused to meet with the president. Democrat after Democrat has vowed to fight him, even if they agree with him.

It”s leftists who need to come together.