Chaos erupted on the U.S.-Mexico border around  the Tijuana, Mexico on Sunday.

Despite Trump’s warnings, hundreds of Central American migrants attempted to cross the border.

US Border Patrol agents fired tear gas to disperse rock-throwing migrants as they rushed to storm through a border fence separating California and Mexico.

Some migrants cut a hole in concertina wire on the Mexican side of a levee.

But, apparently, protecting our borders and sovereignty from Molotov-cocktail-throwing invaders is now “terrorism.”

Pop superstar Rihanna accused the United States Border Patrol of “terrorism” over their use of tear gas to stop migrants from illegally crossing the U.S.-Mexico border.

Rihanna posted a screenshot of a tweet describing the use of tear gas on Instagram, captioning it with the word, “terrorism.” 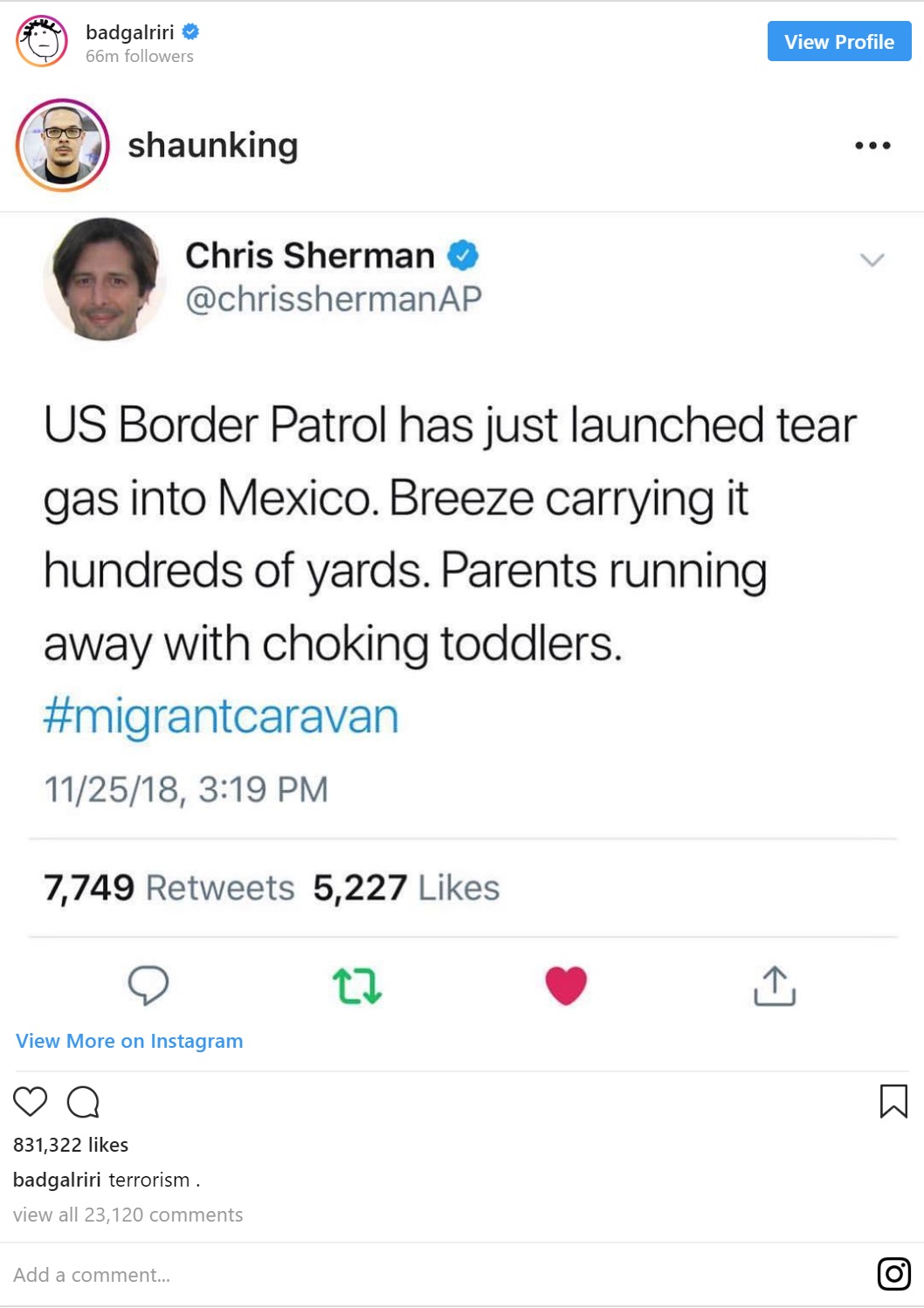 It’s easy for a mega millionaire,who lives in a walled-off mansion, fortified  with electronic surveillance cameras, security systems and body guards, to demand that the world cater to socialist views.

When migrants throw rocks at border patrol and set trees on fire, what does that make them?

It would be interesting to see how she responds to a couple hundred people charging the fence and gate surrounding her home.

Rhianna, leave your front gates open or them so they won’t have to slow their pace to get inside to find warm showers, gourmet meals, and plush, comfy beds.

So when the Democrat-sponsored Central American invasion finally reached the border, why not go for Trump’s jugular. And that’s just what this Democrat Congressman did.

Sen. Brian Schatz, D-Hawaii, tweeted Sunday that the use of tear gas against Central American migrants who attempted to enter the U.S. illegally may have been a violation of international agreements governing the use of chemical weapons — before he backtracked.

At the time of this tweet, America was under attack from invaders. So the border patrol and elements of the U.S. military fired tear gas at them.

Tear gas has been used as crowd-control in almost every country on the planet, and in some cases against American citizens. The use of tear gas violates no agreements, foreign or domestic. Yet, Schatz decided to make the case that Trump used “chemical weapons” against invaders.

At one point the president ordered the border closed.

This move came after invaders tried to penetrate several points along the border at the San Ysidro border crossing between Tijuana, Mexico, and California.

Because America doesn’t have a border wall, the invaders tried to squeeze through gaps in wire, climb over fences and peel back metal sheeting to enter.

In response to the reports, Schatz initially tweeted:

“Tear gas across the border against unarmed families is a new low.”

“Who gave the order? Did it implement or contravene policy?” He then tweeted “WHO GAVE THE ORDER?”

“Why tear gas? Is this consistent with the Conventions on Chemical Weapons?”

Only a few minutes later, Schatz deleted the tweet, and replaced it with:

“Anyone uncomfortable with spraying tear gas on children is welcome to join the coalition of the moral and the sane. We can argue about other stuff when we’ve got our country back.”

And there you have it…women and children.

Has this clown looked at the makeup of this invasion? It’s mostly men.

In an exchange with opinion writer Stephen Miller, Schatz admitted that “I went ahead and deleted the one about chemical weapons because I just don’t know enough about what happened.” He then asked Miller: “Does this not strike you as excessive?”

Democrats act like everything Trump does is new and unique. He’s the only president who orders borders protected.

I suggest they ask themselves, “What would North Korea do?”

Or perhaps they do a status check, and ask, “How would we react if Obama did it?”

The best litmus test is to ask yourself, “What would I do if people were invading my house?”

Of course Rihanna never dared to consider sharing her house with these invaders before she decided to throw America under the bus.

Perhaps Rihanna should tweet her address, so we can all seek asylum with some fancy new digs.