To quote the president in his post-impeachment trial, those polls were “bullsh*t!”; then and particularly now.

According to various polls, the president leads all Democrat contenders and by wide margins.
In fact, one website, FiveThirtyEight, tracks various poll data. Here are their latest numbers: 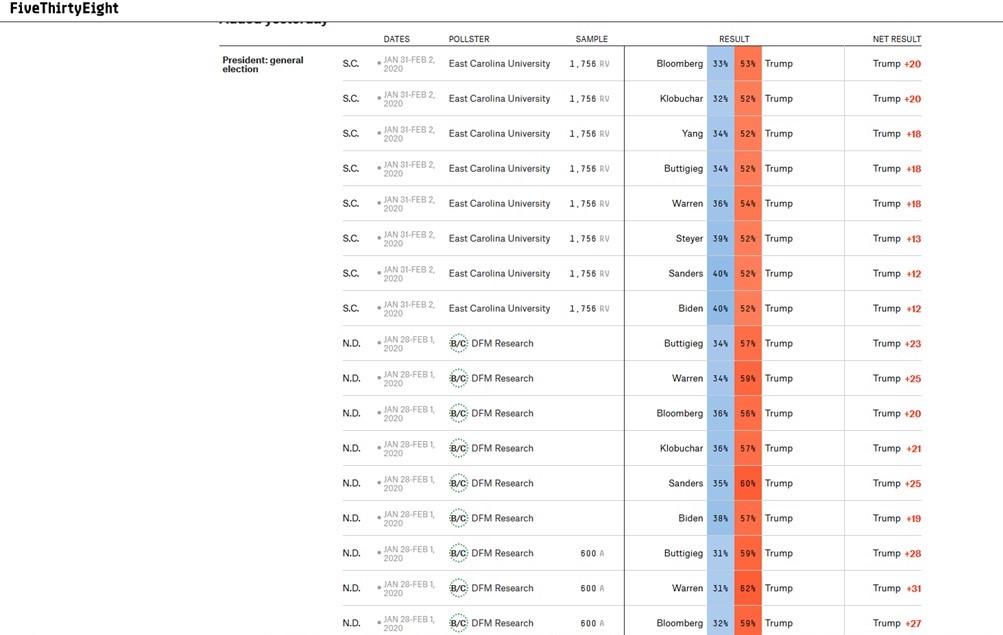 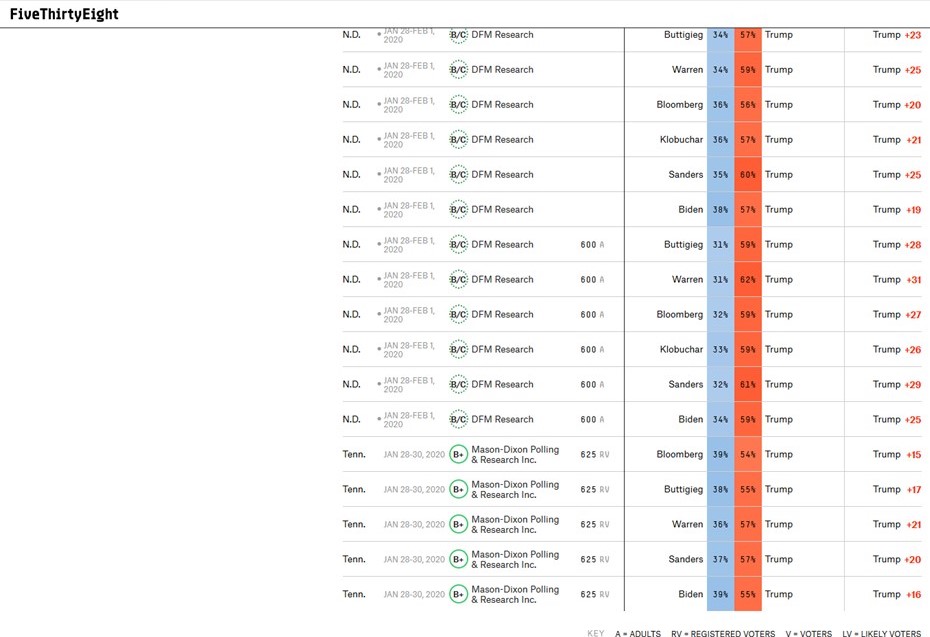 .
No matter how you slice it, Trump wins 2020. Period.
These are the most realistic numbers I’ve seen since polling on Trump began almost 5 years ago. Trump’s closest challenger is Bernie Sanders, whom he leads by 12 percent.
I’m going from memory, but I do recall reports that Biden lead Trump by 16 percent at one point. Now Biden falls behind Trump by 19 percent in the DFM poll? That’s a 35 point swing.
It gets worse. Apparently not only do Democrats pale in comparison to President Trump, but their inability to nail down a candidate only serves to bolster Trump’s lead.

Former VP Joe Biden may be playing the “rope-a-dope” made famous by Muhammed Ali. However, Biden appears to be the dope.

With Biden’s credentials as a former senator and vice president, one understands his strategy. Particularly given his Democrat presidential challengers.

Leave it to Democrats to gather such a stellar group of misfits and scoundrels. Typically, a candidate with Biden’s bona fides need only watch the carnage as his opponents rip each other to shreds. Biden has a problem, however: his record.

Also, in his pursuit of fortune Biden left a trail of clues even Inspector Clouseau could follow. Soon, even the hapless media will be forced to showcase Biden’s dirty laundry in their financial shenanigans. And the pay-for-play deals uncovered may have all the Bidens locked up.

Second, Biden is a racist.

If Donald Trump had Biden’s actual record of racism, Trump would never be president. Biden openly befriended members of the KKK, white nationalists, and segregationist. After saying he would never apologize for these friendships, Biden promptly apologized for these racist relationships.

Biden’s problems show up in the poll numbers.

Understand that Biden’s poll numbers were the best when he declared for the presidency. They haven’t gotten better, now will they.

Biden’s campaign faces a major dilemma. Let Biden campaign and lose or keep Biden behind the scenes and lose.

Even still, while reporting on Biden’s latest drop in the polls, MSNBC makes it about Trump:

President Donald Trump has spent a lot more of his time lately worrying about Bernie Sanders and Mike Bloomberg.

The latest 2020 Democratic presidential primary polls gives some hints why.

Seriously? Trump is worried about Sanders and Bloomberg? Trust me, Trump relishes in the media hit job on Sanders. The Trump campaign doesn’t need to spend a dime fighting Sanders when Hillary Clinton happily threw her former pay-for-not-play protege under the bus.

And as for Bloomberg, the same applies. The media is hammering him. And when they are done with the carcass, it will continue to beat itself. Like Biden, Bloomberg is his own worst enemy.

What doesn’t the public prefer to do than watch a Bloomberg press conference? If you think the Democrat gabfest at the Senate impeachment farce is boring, compared to hearing Bloomberg, that looks like Carnival in Rio.

Post impeachment, and Trump registers his highest poll numbers ever. Compound that fact with news of this head-to-head polling on the heels of “Impeachment Farce”, and you get DefCon 1 for Democrats.
Only God can save them now. And if I may speak for God, “Saving the Democrats ain’t happenin’!”
Facebook Twitter
Tiffany LayneFebruary 7, 2020
2 minutes read
Don’t Miss Out!