Poetic justice in the era of Wuflu insanity. States who remain locked down experience the highest Wuflu nunbers.

I’m not surprised. Because this scamdemic can’t last forever, despite attempts by Leftists in The Great Reset.

Recall that Governor DiSantis led the way and opened Florida, and Georgia followed closely after. Next came Texas, as governor Greg Abbott announced that he would end the state’s mask mandate and allow most businesses to function at 100 percent capacity.

Vanity Fair ran an article with the title “Republican Governors Celebrate COVID Anniversary with Bold Plan to Kill Another 500,000 Americans.”

Since Texas reopened, other states joined, as the chorus of criticism began. Reopening policies were called reckless, sure to lead to unprecedented death. Georgia’s policy was denounced as an experiment in “human sacrifice.”

A funny thing happened on the way to Armageddon. Leftists were flatly wrong.

As it turns out, many of the states with the worst growth in Wuflu cases and death counts locked down. But don’t look for Dr. Fraudci to explain this “strange” phenomenon. Because he’s still calling for mass vaccinations, lockdowns, masks, and sacrifice of personal freedoms. 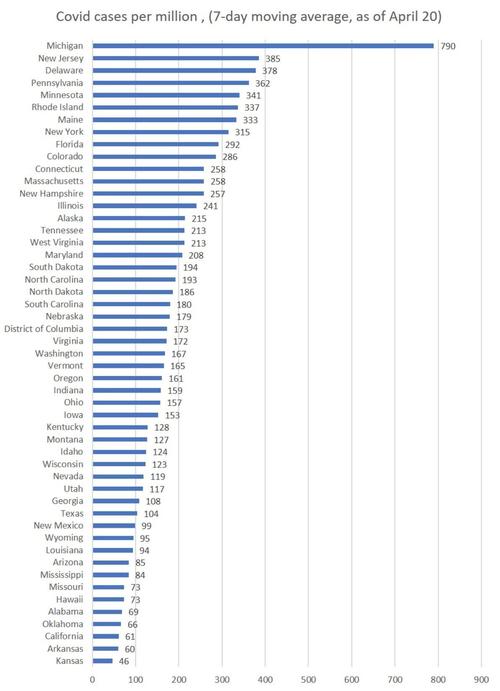 Here is my personal belief on the facts of the scamdemic

Fraudci and other Leftists inflated the infection rates of Wuflu. Then, they inflated the deaths. After a $6 trillion money-grab, they continue to push The Great Reset.

The Great Reset is meant to destroy the middle class and implement idiotic ideas like universal basic income. Leftists want Americans to get used to the new norm of government “helping” during this faux crisis.

As for the virus, the best solution for it is herd immunity. The states that opened up are achieving herd immunity. But Leftists want Americans to believe that vaccines are the answer. That is a lie. A necessary lie for the Left, particularly when discussing Wuflu variants and the potential for future lockdowns.

Leftists pulling Fraudci’s strings must set the narrative that the government can lock us down whenever they need to, even for a disease that kills less than one percent of those who get it, and that’s with padded stats. How about that mildest ever flu year in modern history?

As Congressman Jim Jordan argued, a scamdemic doesn’t not supersede the freedom of Americans.