Q: How can black Americans ever overcome systematic racism, like bad schools?

A: Since whites are not genetically superior to blacks in any way, the intelligence of black individuals subjected to inferior systems of education will inevitably triumph. It is NOT white kindness, courtesy or concern that has elevated the economic status of black America. It is the naturally occurring intelligence one should expect of any population anywhere that overcomes.

In addition to this, you should understand that most Americans are anti-fragile to racism and racial theorizing. The more you throw at them, the more they fight back and become impervious to its seductions. You might not be able to perceive this in any moment if you’re glued to slogans and headlines, but try to remember the longer arc of history.

Ask anyone in 2000 if we would have a black president and a female vice president within 20 years. They will look at you like you just gave birth to an octopus.

All systems and systematic operations have flaws. Black Americans have hacked all systems, and will not be held back.

This is one of those things that has to be repeated – the theory of black victimology is just like every other ass backward theory. Sometimes you have to keep reminding people that the earth isn’t flat.

In the meantime, simply consider the obvious. Does anyone actually believe that black Americans do not possess the competitive spirit and drive necessary to win and dominate? Does anyone honestly think that is the spirit of George Floyd wins over that of LeBron James?

What every black American knows is that their overall prospects are as good or better than that of their parents and grandparents. Yet what is presented day in and day out are statistics comparing average black populations to average white populations. It is inevitable that this one dimensional approach to black progress would create its own set of problems. So now we are living with the theories that conveniently interpret the gaps indicated by such statistics as racially deterministic. Take the following example. 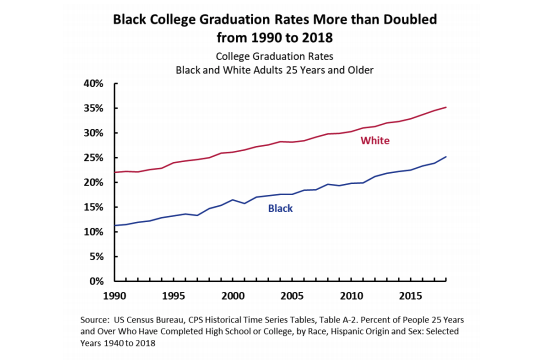 Ever heard of redlining? Look at the red line in the above chart. THERE IS NO REASON FOR IT TO EXIST. If you simply evaluated how black Americans are improving themselves, you would have nothing but good news to report. But there is always the aim to compare average blacks to average whites, as if this always indicates a cause and effect.

This is the racialized universe of information which always generates the same incorrect view, that whatever blacks do, whites are doing better so there must be a racist reason.

The agenda is clear. You cannot simply say, all Americans are improving their educational success by graduating in greater percentages going back 30 years. You draw attention to the racial gap, and draw inferences to systematic racist oppression that supposedly explains everything. This is not the scientific method, this is racial propaganda dressed up to fuel an agenda. This does not celebrate the demonstrated success of black Americans, it just gives people more foolishness that they think is informative. And thus today we have the racial theory of systematic oppression. 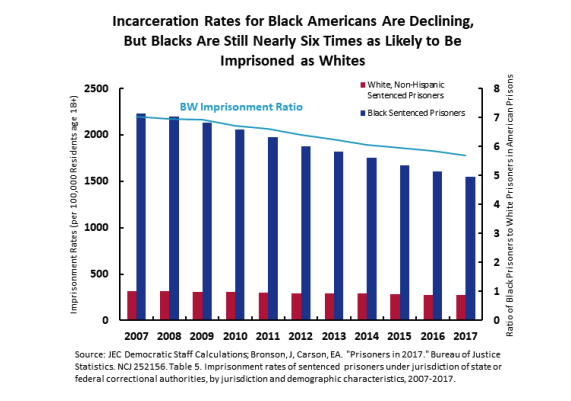 Incarceration rates for black Americans are declining BUT… racial comparison to whites. This, ladies and gentlemen, is the rigged sport. Where improvement and achievement is not rewarded for its own merit. The focus is on a constructed comparative failure of black America despite the undeniable success of the underlying trend.

“Yes I know you have a 3.75 GPA son, but that white kid over there has a 4.0. You will always be inferior.” That’s the systematic racist narrative. I just hacked it for you. You’re welcome.