I saw this graphic, and decided to dig into this a bit. 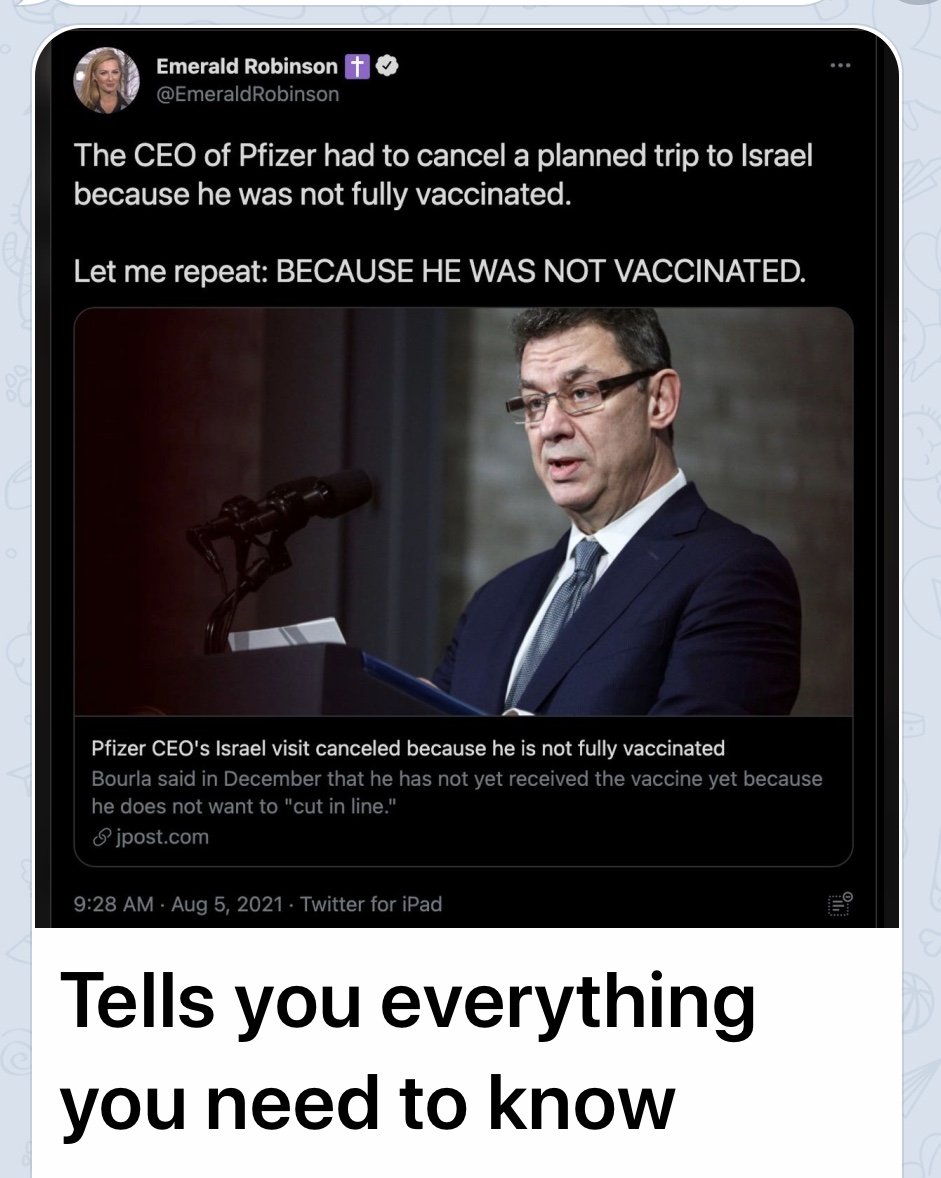 I did some research on this, and in fact the CEO of Pfizer hadn’t gotten a shot as of Feb 2021. It was said that he was “respecting the priority. Supposedly, he eventually got the shot. But did he really? I doubt it.

Understand that we will never know the elitists who really got the shot. Because you would have to be a fool to get that shot if you lead the charmed lives of Leftist elitists. Most got fake shots and I can’t blame them.

Look at the list of side effects of Wuflu, and ask yourself if Anthony Hopkins really got this shot.

At the 0:18 mark, notice that the nurse shoots the liquid from the syringe.

Trust and believe that most of the so-called Leftists who are vaccinated, got the same treatment, including Joey Demento. And they will get fake “vaccine passports” as well.

In real hypocrisy, Biden doesn’t have a requirement for vaccinations for illegals. They enter the country illegally daily with permission from Team Demento. Yet, legit wannabe citizens can’t get into America sick.

Billionaire Governor Pritzker of Illinois wants tots to get masks. Why? Because NONE of them are dying! Repeat NONE. Clearly, if tots were dying, you wouldn’t need to mandate masks. Because parents would be SCARED TO DEATH and clamoring for something to save their little children.

But what we do get are parents who regret getting their children the shot, due to complications from the vaccine. Where is the outcry? Where are all the dead babies in the streets?

Clearly, there is no reason to get the shot; at any age. But for children, the shot borders on child abuse.

Check out this report:

While Pfizer claims its vaccine is 95% effective, this is the relative risk reduction. The absolute risk reduction — which is far more relevant for public health measures — is actually less than 1%

While benefits from COVID “vaccination” in children between the ages of 12 and 15 are rare and short-lived, side effects are common and long-term effects are completely unknown

In the 12-to-15 age group, 75.5% experienced headache, along with a long list of other transient side effects. Serious systemic adverse events occurred in 2.4% of the trial subjects receiving Pfizer’s mRNA shot

While Pfizer boasted a 100% efficacy rate in 12- to 15-year-olds, this conclusion is a statistical trick. Fewer than 2% of fully vaccinated children avoided COVID-19; 98% of them would not have gotten COVID anyway. So, the benefit is small.

With all the nonsense surrounding this Chinese bioweapon, some Leftist Americans have lost their minds. Consider that California may be the first state to MANDATE Wuflu vaccine for health care workers. So much for these “heroes.” Apparently, heroes get their rights violated by Leftists.

I recently had a discussion with a fan who informed me that the shot isn’t that bad. He said that his son has seen first-hand all the Wuflu cases, and they have 5 friends who have died from the Wuflu. Moreover, he knew of an additional 30 cases.

I responded as follows, though this writing provides more details:

Feds lied about the number of people who contracted Wuflu…it’s MUCH higher.

Next, they lied about the number of people who DIED from Wuflu…it’s MUCH lower.

The Fed currently won’t report real stats on people dying from vaccines, nor will they publicize stats on people with side-effects from the vaccine. Along those same lines, the Fed under-reports the inefficacy of the vaccine, ergo no reporting on REAL stats around people with the shot getting sick. And they are.

Next, the Fed is undoubtedly hesitant about reporting that vaccine won’t stop the Delta variant or any other variants, though they still pretend this is all about the science. Ironically, the Fed has under-reported that the Delta variant is more communicable, but less deadly. Still they recommend reinstating lockdowns and mask mandates. On that note, the Fed quick reports “new cases” of Wuflu, but I have yet to hear any reports on new deaths.

Adding insult to quackery, the Fed is quick to target states (FL & TX) who lifted restrictions on Wuflu, but won’t comment on lockdown states with higher numbers.

This is true worldwide, as the Fed doesn’t discuss areas of the world that didn’t follow Wuflu (nonsense) protocols, yet have NO surge in cases or deaths. Places like Sweden.

Only 1.39 percent of Africa’s population has the full Wuflu vaccine. And those vaccinated are almost exclusively in 5 countries.

What do India and Africa have in common? They don’t have the money to steal from their people.

Add to this the fact that politicians in America said that Black people die in greater numbers than other nationalities, and you can clearly see the blatant lies.

Fact: Anything short of an N95 mask is ineffective against airborne disease. Additionally,  there is NO science around social distancing of 6 feet. Some government bureaucrat pulled this number out of his ass. Further, the establishment of idiotic “rules” where you can walk through a restaurant with a mask, but Wuflu leaves you, when you sit down.

Fact: The actual flu has 189 potential variants and 131 actual variants. The worst flu epidemics have been far more deadly than Wuflu and multiple strains. I wrote of these flus and their killing ability.

While I couldn’t find specific data on the numbers, here is enough to fight against getting this death shot for any teen:

The most recent reported deaths include a 15-year-old boy (VAERS I.D. 1498080) who previously had COVID, was diagnosed with cardiomyopathy in May 2021 and died four days after receiving his second dose of Pfizer’s vaccine on June 18, when he collapsed on the soccer field and went into ventricular tachycardia; and a 13-year-old girl (VAERS I.D. 1505250) who died after suffering a heart condition after receiving her first dose of Pfizer.

So why is the IL governor mandating masks for “tots”. NO “science” supports this Draconian nonsense.

Believe it or not, Joey Demento claimed recently that 350 million Americans were vaccinated. Given that number is larger than the entire population of the US, let’s at least consider the 25th Amendment on Biden. But worse, don’t believe any numbers. The Fed will tell us that everybody has been vaccinated soon, in order to contine to sell the ruse. And the fact that Social media refuses to allow discussion of alternative meds for Wuflu, e.g. hydroxychloroquine,  and pharmacists not honoring prescriptions for other potential cures speaks volumes.

And what about this final fact that Leftists choose to ignore: the ORIGINS of Wuflu. Now knowing what we’ve already known is immaterial they claim. Since when? A crime against humanity has been committed, and Leftists are treating this as a Jussie Smollett situation.

That’s enough information for anybody to take serious pause.