Where are the stories of Wuflu patients filling the hospitals in this time of CRISIS? Apparently those stories have faded into the ether.

But Wuflu is indeed still causing major issues at hospitals. Just not issues the Democrats want discussed. Like this story about swamped emergency rooms.

Inside the emergency department at Sparrow Hospital in Lansing, Michigan, staff members are struggling to care for patients showing up much sicker than they’ve ever seen.

Tiffani Dusang, the ER’s nursing director, practically vibrates with pent-up anxiety, looking at patients lying on a long line of stretchers pushed up against the beige walls of the hospital hallways. “It’s hard to watch,” she said in a warm Texas twang.

But there’s nothing she can do. The ER’s 72 rooms are already filled.

If those symptoms sound familiar, they should. Because they are all side-effects of the various vaccines to treat Wuflu.

I’m not ready to tout the “science” just yet.

However there appears to be a correlation between vaccinated people and Wuflu vaccine side effects.

Even more evidence surfaces, when you consider the people dying post-vaccine. People who were healthy prior to the “death poke” and had no comorbidities.

In this story from New Zealand, one can see how media treats Wuflu vaccine-related deaths.

The sudden death of a 40-year-old man with Covid-19 who had been isolating at home has been referred to the Coroner who will determine whether it was coronavirus-related.

“There has been speculation this death was vaccine-related but we can confirm it was not,” officials said in this afternoon’s Covid update.

A little closer to home, a high school senior in Pennsylvania died from “a sudden cardiac incident”, as described here:

In a letter to parents, the school announced that the senior died after ‘a sudden cardiac incident’ Saturday night.

In multiple articles, health officials warn of sudden cardiac death. See for yourself. 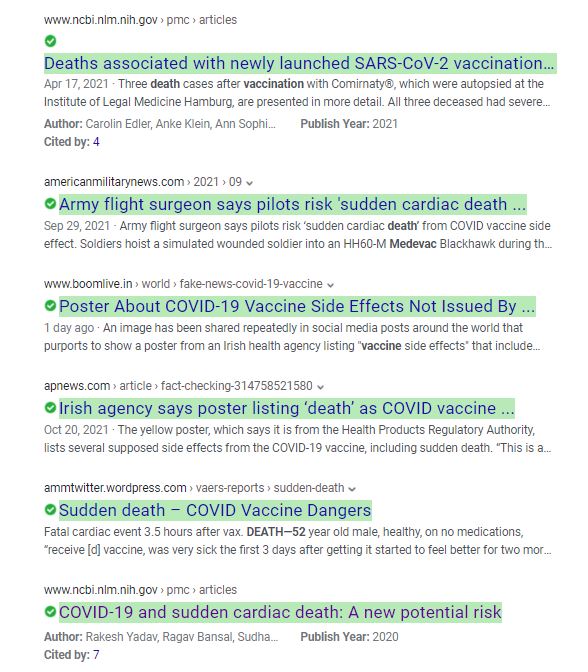 You can bet that if Trump were president, there would be pages of sad stories from Wuflu vaccine-related deaths, replete with sad stories.

However, in the time of deception and the New World Order’s Great Reset we are told these vaccines are safe.

Our health system is broken. And Team Demento continues to break the system further with “death poke” mandates.

Sane people around the world must continue to push back against this medical tyranny. Or suffer the consequences.