Billionaire rapper Jay Z and his wife Beyoncé lent their star presence to a rally in New York City headed up by Al Sharpton featuring Trayvon’s mother Sybrina Fulton, who was joined by her son Jahvaris Fulton.

Nationwide rallies were held demanding justice for Trayvon Martin, the teen who was shot and killed by George Zimmerman, a Neighborhood Watch volunteer who tragically crossed paths with Trayvon and who has since been acquitted of second-degree murder.

Over 100 rallies and vigils took place across the nation organized by the Reverend Al Sharpton, who is calling for the US Department of Justice to pursue civil rights charges against Zimmerman, even though he was acquitted in the state of Florida.

In the Big Apple, a diverse sea of New Yorkers showed up to stand for Trayvon by holding placards.

One protester’s sign quoted Barack Obama, who said, “I am Trayvon.” Another reached their own verdict with a sign saying “Guilty for stalking and murder.” There were fashion statements like “I love my hoodie,” patriotic expressions like “Justice for all Americans,” and Stevie Wonder fans encouraging Beyoncé to “Boycott Florida.”

Tearing up, Trayvon’s mother, who’s been thrust into the limelight, was met with shouts of “We love you.” Sybrina wept as she told the crowd, “Trayvon was no burglar [he stole jewelry], Trayvon is not here to speak for himself [obviously]. Trayvon was a child and sometimes I think that gets lost in the system.”  The last of which makes no sense at all.

At One Police Plaza, Jay Z, Mrs. Z, and Al Sharpton stood beside Sybrina Fulton. The quartet that included Shawn Corey Carter was a tad ironic, especially because Jay “Gangsta’ Sh*t” Z, whose lyrics extol the glories of the type of thug life Trayvon allegedly aspired to, could be considered partially responsible for the teen losing his life.

It was either that, or a few more bangs against the concrete and Mrs. Zimmerman would have been speaking at a memorial for her son.

Former Governor Eliot Spitzer, that bastion of honesty and integrity, came out to support Martin and added his black socks to the discussion when he said that the Zimmerman/Martin ordeal is a “civil rights issue.” “Regardless of how you view the legality of the verdict in isolation, justice here was denied,” Spitzer opined, and “An innocent young man was shot and killed and that is a tragedy.”

Seeing as how Beyoncé chose not to lead another moment of silence for Trayvon, Spitzer (aka “Client #9”), saying that Trayvon was an “innocent young man” added gravitas to the event.

As for Beyoncé, it goes without saying that the performer was accompanied by a horde of armed bodyguards.

Nonetheless, when Queen Bey walked by protesters they shouted for her to follow Little Stevie Wonder’s lead of “No concerts in Florida!

Television Judge Greg Mathis was there criticizing stand-your-ground-laws, and said that legislation must be supported to overturn existing regulations in 30 states, including Florida. Mathis insisted,

“This backward state allows you to shoot first and ask no questions.”

Apparently this judge thinks verdicts should be questioned and an unbiased citizen jury reaching a verdict should be criticized for following the law.

George Zimmerman, stand-your-ground, and the trial verdict were not alone. NYPD was also dragged into the fray.  First they were accused of racial profiling, and then the stop-and-frisk policy was called into question.  Steven Shryack, 62, held a sign: “They never stop and frisk old white guys like me.”

Grandfather to a child of mixed race, Shryack asked “What kind of future does he face? I have the luxury of being white in this world. I have an unfair advantage.”  Steve should have spoken to Beyoncé about unfair advantage, because she’s a woman of mixed race whose future was severely impacted by being endowed with African-American, Louisiana Creole, and Native American blood.

Another protester from the East Village who, trust me, probably also plans to vote for Anthony Weiner and Eliot Spitzer, said the Zimmerman verdict was “a horrible injustice.”  And although Bill Clinton wasn’t in attendance, the East Villager did make a veiled reference to the former president when he said “There’s racism going on in our country and everybody tries to blow it off.”

Sharpton, age 58, who rides around in a limo with his 35-year-old “girlfriend,” told the crowd “We are going to fight for what is right. They used to say segregation is better than slavery, but they never sat in the back of the bus” – and neither did he.

With Jay Z and Beyoncé adding credence to his words, the Reverend Al managed to sum up the spirit of the whole day.

Harkening back to certain, shall we say, less-pleasant aspects of the Tawana Brawley case, Al Sharpton came up with an appropriate “Justice 4 Trayvon” motto when he said, “This is a movement, not a moment.” 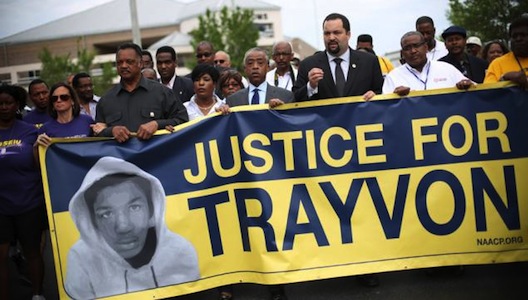