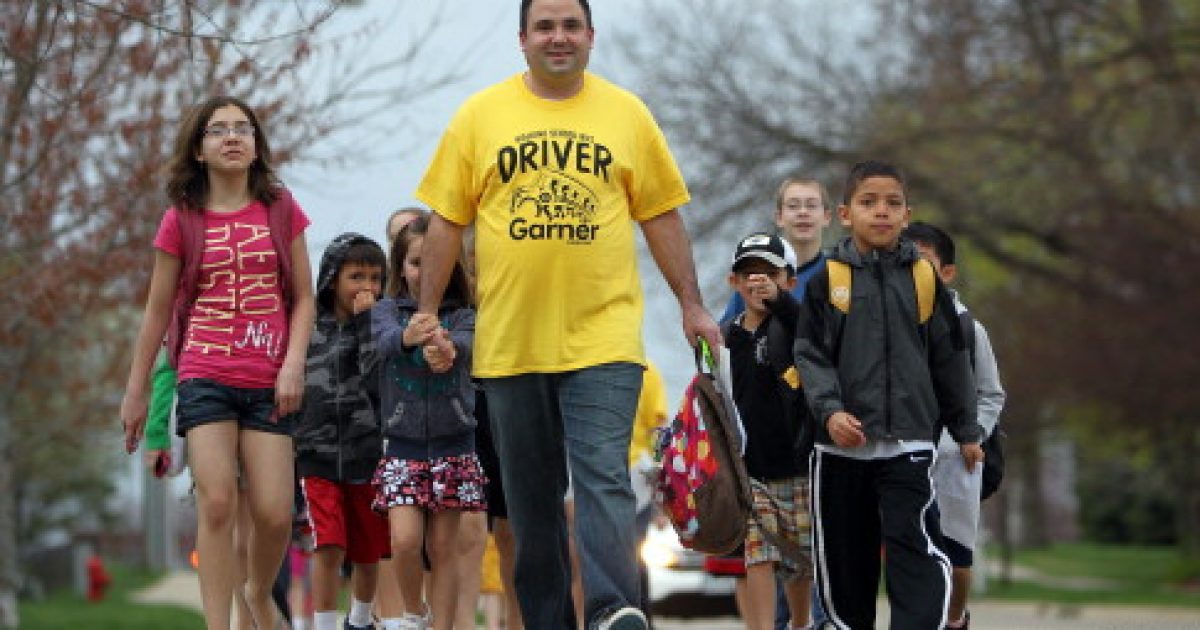 Already a self-appointed nutritionist, Mrs. Obama must be expanding her healthy-living tent to include exercise physiology.  Seems Michelle’s walking points come from WalkingSchoolBus.org, an organization run by the Department of Transportation, the Pedestrian and Bicycle Information Center, and the Partnership for a Walkable America.

Why the switch from the bus to the pavement?  Well, it must be that the woman who rides around in million-dollar limousines that she ships around the world on jumbo cargo planes wants to see what happens when students, thanks to her calorically pared-down school lunch program, are forced to walk home from school on an empty stomach.

Talking to mayors who recently gathered at the White House as part of her “Let’s Move!” anti-obesity campaign, Michelle cited Knox County, Tennessee’s bike-share program and something called a “walking school bus.”

No offense, but come on people, it had to be a liberal that came up with the term “walking school bus.”

Pushing the walking idea, Mrs. Obama, shared her own experience as a walk-to-school student when she said, “I’ve heard more and more of this kind of walking school bus happening all over the country — so that kids can get exercise on the way to school, kind of like we did when we were growing up.”

Are we allowed to ask?  If kids need exercise, will Sasha and Malia and their army of Secret Service agents be hitching a ride on the “walking school bus” too?

And the reason for kicking the kiddies off the school bus is supposed to be for exercise?  Is that even necessary, because based on the negative reaction to Mrs. O’s school lunch program requirements, one would think children are getting plenty of aerobic exercise running screaming from lunchrooms across America.

Although Mrs. Obama only walked 0.7 miles from her home in Chicago on South Euclid Avenue to Bryn Mawr Elementary School on South Jeffery Boulevard, that minor detail shouldn’t disqualify her from being a know-it-all when it comes to walking to school. After all, she regularly tucks into 1,700-calorie lunches, but that doesn’t stop her from sermonizing incessantly about the benefits of steamed organic kale.

Reminiscing, lover of sweet potato fries, Mrs. Obama asked the mayors, “You remember the miles of walking you did with a sweet potato in your pocket?”  Michelle shared that Grandma Robinson, who now lives on the taxpayer dole and rides in the limo with her little girl, told the sweet potato story just that morning, a tidbit the mayors were probably dying to hear.

The first lady didn’t ask for a show of hands, but it would be interesting to know how many of the mayors also walked to school with a sweet potato in their pocket.  And if we need something to look forward to, maybe if Anthony Weiner becomes the New York City mayor Michelle Obama can get him to ’fess up and tell us what he had in his pocket when he walked to school!

“And that’s what Let’s Move! is all about,” said Mrs. Obama, “that’s what we’re really trying to do here.”  Hmmm…do I have this right?  Instead of a chicken in every pot, now it’s about a sweet potato in every pocket?

So there it is! Mrs. Obama summed up her speech to the mayors by saying that Let’s Move! is about kicking kids off school buses, stuffing sweet potatoes in their pockets, and making them drag their hungry, exhausted selves back and forth to school.

Bill O’Reilly Smashes On Liberal Media, Says They Are Out To ‘Destroy’ Conservative Voices
Ken Blackwell