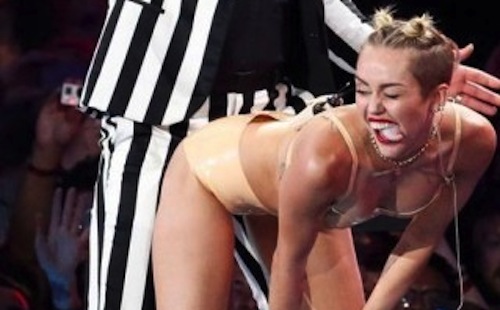 Disgusting, obscene, pornographic, out of control.

These are just some of the thousands of comments tweeted and posted on social media and blogs after the jaw-dropping performance of Miley Cyrus on the VMA’s the other night.

I do not watch MTV so I had to pull up the video after the fact to make sure that I was correct in my reporting, and after seeing it, I am in complete agreement with everything being said about this horrific display.

The so-called performance was as close to onstage pornography as I have ever seen or heard of.

My question is; what was going through the minds of everyone involved in this blatant display of decadence and degradation? First of all, why would Miley Cyrus want to portray herself in such a way?

I know she has issues with drugs as well as other psychological problems, but to willingly do something like this reeks of self-loathing and zero self-esteem.

Related:  Thank you Will Smith and Family