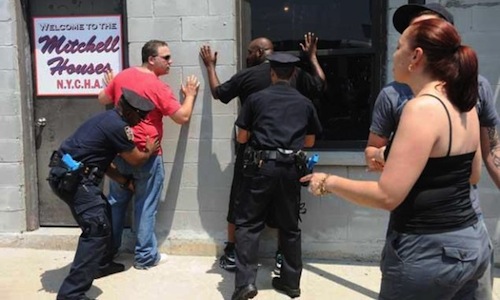 Shootings are up in NYC, where only the elite (and the criminals) have guns.

The elite have their legal guns, while criminals avail themselves of whatever firearms work to commit crimes. Cops used to see a ne’er-do-well, and they could stop them on suspicion of looking like a criminal.

There’s the rub. What does a criminal look like?

Only profiling determines who looks like a criminal, and profiling is not good…at least according to Liberals. The Liberals in NYC swayed the judges to agree with the “profiling is evil” meme. And as with all things Liberal, their “good intentions” backfired.

According to this report,

In the month after the policy was ruled unconstitutional shootings spiked nearly 13 per cent while gun seizures fell almost a fifth, the figures show.

In the 28 days up to September 8 there were 140 shootings across the city, compared with 124 over the same period last year, according to NYPD statistics

Liberals say that cops should have guns because they are trained to use them, yet ignore the fact that cops are trained to recognize criminal behavior. Profiling is fine when Madison Avenue does it, but when it comes to public safety, only the FBI can profile. The beat cop dare not try it.

Stop and Frisk was halted, because it was said to target minorities. And it does. Thanks to Liberals, minorities live in “minority neighborhoods” where much of the urban indoctrination centers’ crime is committed. Makes sense.

But leave it Liberals to take a policy that saves lives, and make it about race.