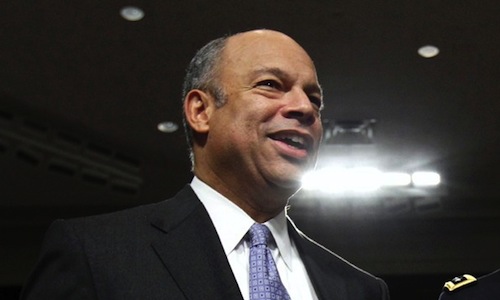 America will soon have another do-nothing attorney named Jeh Johnson in DC, and this one will likely head Homeland Security.

His skill? If you guessed that he actually knows anything about security, guess again.

His skill is being an attorney who can fundraise!

According to Judy Woodruff, here is what qualifies Johnson for the post:

Johnson served as general counsel of the Air Force during the Clinton years. Then, in private life, he became a prominent Democratic fund-raiser, up through the Obama campaign, before returning to the Defense Department as its top lawyer during the president’s first term.

As general counsel, he helped shape many of the administration’s counterterrorism strategies, most notably its controversial use of drone strikes in countries like Pakistan, Yemen and Somalia. He also co-authored the Pentagon’s report on gays serving openly in the military that ushered in the repeal of the don’t ask, don’t tell policy in 2010.

Let’s be clear: Johnson is just another attorney.

The idea that he has some deep understanding of terrorism is as applicable as his co-authoring a report on gays. Actually, some of that might qualify him, since many gays behave like terrorists.

Johnson waxed rhapsodic on being a New Yorker, and his feelings about the tragedy of 9-11:

When that bright and beautiful day was — a day something like this, was shattered by the largest terrorist attack on our homeland in history, I wandered the streets of New York that day and wondered and asked, what can I do? Since then, I have tried to devote myself to answering that question.

He “tried” to devote himself. Well at least he’s TRYING. Again, none of this qualifies this man for such a post. All Johnson did well fundraise for Barack Obama. And as we know by now, that’s enough to get you part of the treasury.

The only good thing about this appointment is that we have another “johnson” in government!”