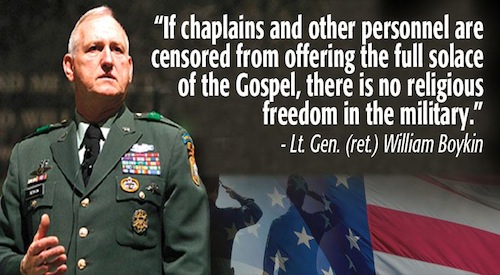 In what should be an outrage to EVERY American, Barack “No Pork Chops” Obama is threatening to arrest military chaplains who hold religious services during the government shutdown.

As reported in the Daily Caller, this edict prevents chaplains from having services even on their own time:

“With the government shutdown, many [government service] and contract priests who minister to Catholics on military bases worldwide are not permitted to work – not even to volunteer,” wrote John Schlageter, the general counsel for the Archdiocese for the Military Services USA, in an op-ed this week. “During the shutdown, it is illegal for them to minister on base and they risk being arrested if they attempt to do so.”

I mentioned that it’s one thing to try to hurt the taxpayer.

But to USE the people we hold dear, which in this case is the military and military chaplains, is reprehensible.