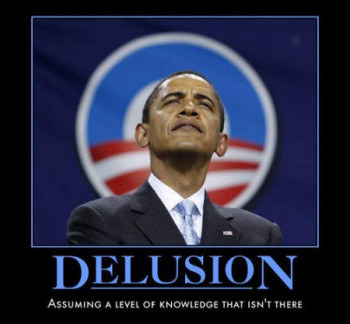 Barack Obama is delusional to believe that ObamaCare will boost exports. But what else is new with this guy.

As the Washington Examiner reports:

President Obama told a group of corporate leaders on Thursday that his healthcare overhaul would create more exports for U.S. companies, continuing his economic push in the face of the broader Washington budget debate.

Exports of what? The press challenges Obama on nothing he says or does, no matter how insane the comment or action.

As I read the article, I figured surely Obama will tell us what ObamaCare was going to allow America to export, unless he has figured out a way to bottle “misery?” Obama went on to say:

“The cost of healthcare is now growing at the slowest rate in 50 years…If the current trends hold … we’re going to see a continuing slowing of healthcare costs. That’s going to boost our exports.”

The Unaffordable Care Act (UCA) has nothing to do with exports. And in typical Obama style, he just says what he believes people want to hear, without a care in the world of how insane it sounds.

So we are to believe that if we implement a layer of bureaucracy, the economy will improve. Let’s pretend for a moment that ObamaCare worked, we would have a lot of healthy unemployed people.

With Obama, one can only guess that he is looking to export healthy white people?