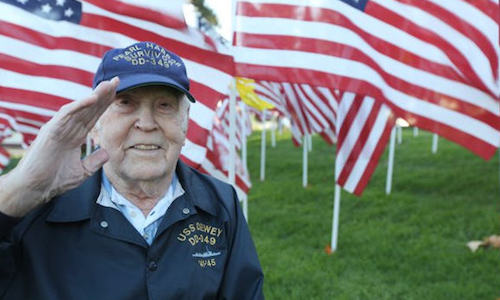 After signing my Pop, EM2 Bud Cloud (circa Pearl Harbor) up for hospice care, the consolation prize I’d given him (for agreeing it was OK to die) was a trip to “visit the Navy in San Diego.”

I emailed my friend and former Marine sergeant, Mrs. Mandy McCammon, who’s currently serving as a Navy Public Affairs Officer, at midnight on 28 May. I asked Mandy if she had enough pull on any of the bases in San Diego to get me access for the day so I could give Bud, who served on USS Dewey (DD-349), a windshield tour.

And from there, the reality occurred.

The next day she sent me an email from the current USS Dewey (DDG 105)’s XO, CDR Mikael Rockstad, inviting us down to the ship two days later.

We linked up with Mandy outside Naval Base San Diego and carpooled to the pier where we were greeted by CMDCM Joe Grgetich and a squad-sized group of Sailors. Bud started to cry before the doors of the van opened. He’d been oohing and pointing at the cyclic rate as we approached the pier, but when we slowed down and Mandy said, “They’re all here for you, Bud,” he was overwhelmed.

The USS Dewey site is here.

After we were all out of the van directly in front of the Dewey, shaking hands and exchanging pleasantries, Petty Officer Simon introduced himself and said as the ship’s Sailor of the Year he had the honor of pushing Bud’s wheelchair for the day. Unbeknownst to us, they’d decided to host Bud aboard the Dewey, not at the Dewey. And so they carried him aboard. None of us expected him to go aboard the ship. I’d told him we were going down to the base and would have the chance to meet and greet a few of the Sailors from the new Dewey. He was ecstatic. The day before, he asked every few hours if we were “still going down to visit the boys from the Dewey,” and “do they know I was on the Dewey, too?”

If this isn’t bringing a tear to your eye right now, then I submit that you aren’t quite human. 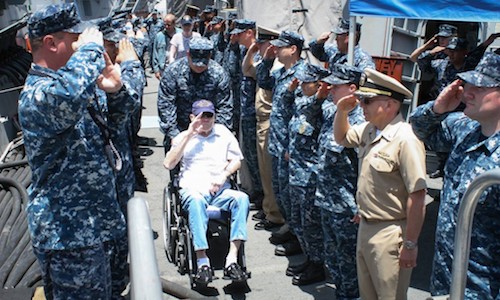 Once aboard, we were greeted by the CO, CDR Jake Douglas, the XO and a reinforced platoon-sized group of Sailors. To say it was overwhelming is an understatement. These men and women waited in line to introduce themselves to Bud. They shook his hand, asked for photos with him, and swapped stories. It was simply amazing.

They didn’t just talk to him, they listened.