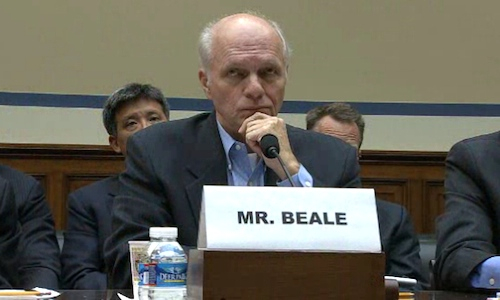 But that’s just where John C. Beale is going, as he pled guilty to shamelessly accepting almost $1 million in salary and other “bennies.” The fed called his larceny a “crime of massive proportion.”

His crime was claiming to a CIA spy working in Pakistan, apparently because he didn’t want to do his real job. His real job was to dupe the public into believing the farce of man-made global climate change. And in typical “fed” fashion, it only took TEN YEARS for them to figure it out.

The government’s highest paid global alarmist is a certifiable buffoon, and he is not alone. Consider that Barack Obama continues to push the climate change agenda, knowing that the jig is up. Faked emails, faked data, and now this lunatic.

Beale’s lawyer is asking for a psyche eval, and I’d like to save the taxpayers a few bucks and get a “two-fer” and get Obama tested as well. Obama may convince the Hollyweird cocktail-sippers that they should pay for what all other men breathe for free, but it won’t work on Tea Party conservatives.

“With the help of his therapist,” wrote attorney John Kern, “Mr. Beale has come to recognize that, beyond the motive of greed, his theft and deception were animated by a highly self-destructive and dysfunctional need to engage in excessively reckless, risky behavior.”
Kern also said Beale was driven “to manipulate those around him through the fabrication of grandiose narratives … that are fueled by his insecurities.”

That assessment could just as easily have made of Obama.