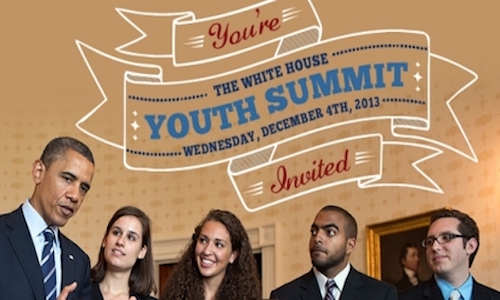 ObamaCare is still fishing for youth to punish, thus the White House will hold a “Youth Summit social” on December 4.

The social, according to the White House is so youth can engage the White House on social media. I sure don’t want to give the Dems strategy, but Obama would fill the joint, if he just held a beerfest.

You’d think somebody on Obama’s team would have considered having some fat frat boy fall off the keg and break his leg at the event. The hapless rube would yell, “Thanks to Obama…I’m COVERED!” and be whisked away in Marine One to the nearest hospital.

Unfortunately, this beerfest is virtual…sort of like actual health “care” under ObamaCare.

To get the word out about the “social,” the White House requested that participants “spread the word” by using the Twitter hashtag “#WHYouth.”

This summit is supposed to educate young idiots on the non-existent benefits of enrolling in ObamaCare. What I love most about the pimping of this event is the Left considers people 18-35 youths. ObamaCare covers “kids” up to 26. Will the Left ever let kids grow up. Essentially for ObamaCare you are young until you burden the system. They you are just a nuisance.

On Wednesday, December 4, 2013 the White House will host a Youth Summit, offering young people from around the country an opportunity to discuss the Affordable Care Act and other issues with senior White House officials. White House Twitter, Facebook, Instagram and Google+ followers ages 18-35 are eligible to apply to attend this White House event on December 4.

As for this “virtual” event, how will these fools know how old anybody is? I suggest we get a bunch of 70 year old conservatives to crash this social with tweets about prostate cancer , gout, incontinence, and other things these “youth” can expect to deal in the future. Or we can get everybody whose healthcare bill has gone up to attend?

Or better yet, we can have everybody who has been kicked off their existing plan tweet their experiences.

What nonsense! Our friend and young, conservative team member, Amy Lutz, sums up the Stupid Youth Summit and #WHYouth.