Every troop takes an oath to uphold and defend the Constitution with a US Flag present.

Every civil servant/officer takes an oath of office and swears to uphold the US Constitution and the state constitution, again with a US Flag present.

Watch the confrontation between these Campbell, Wisconsin, policemen and some citizens peacefully holding signs and US Flags.

Why didn’t the policemen at the scene explain the ordinance the sign and flag holders were violating?

This is rather disturbing, especially given the trend under Obama to infringe more and more of our constitutionally guaranteed rights.

Here is the oath of office taken by Madison, Wisconsin, police: 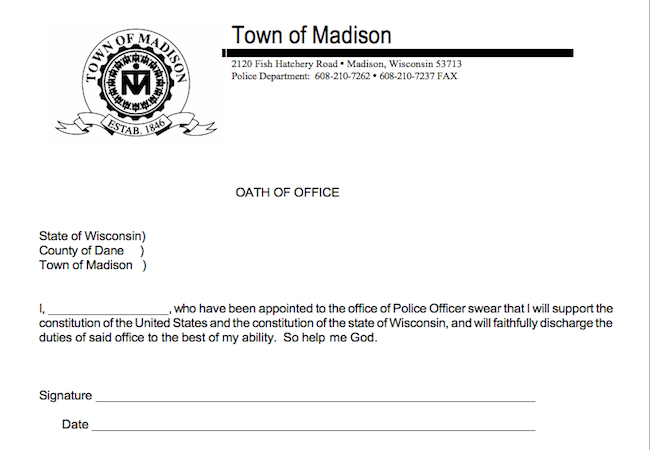 The First Amendment of the Constitution states:

Congress shall make no law… abridging…the right of the people peaceably to assemble, and to petition the Government for a redress of grievances.

From the inception of the colonies the right to petition/assemble was implicit:

In 1774, the Declaration and Resolves of the First Continental Congress proclaimed that the colonists “have a right peaceably to assemble, consider of their grievances, and petition the King; and that all prosecutions, prohibitory proclamations, and commitments for the same, are illegal.”

The emphasis on the government’s lack of power to punish a citizen for petitioning made the right to petition more robust in the revolutionary era than the more general right to freedom of speech.

These citizens were not flag-burners nor were they terrorists. Something is wrong when US citizens obey the Constitution and honor the flag, and yet are harassed and cited, compelled to appear in court before a judge and/or pay a fine.

Something is wrong, and we should all be on guard!