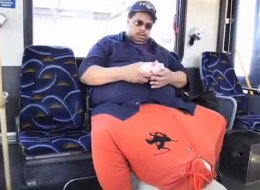 I was looking at the guide on my TV and there was a teaser for a show about a man with the 132-lb scrotum. My jaw dropped, and I hadn’t even seen any pictures.

This story was amazing to me, but not necessarily for the reason you think.

Oh, I’m sure a 132 lb scrotum is impressive, but the bigger question (pardon the pun) is at what point did he decide to GET THAT SCROTUM LOOKED AT? Holy Moly mother of all things GARGANTUAN, what’s your TRIGGER? Can I explain my level of concern effectively by saying if my scrotum grew by say, 1 POUND, I might sign up for ObamaCare!

I mean at some point even the girls quit asking if that’s a banana in your pocket, and ask you to free that family of Guatemalans in your loins!

How do you possibly sleep with a 10-lb scrotum, much less one that weighs 132-lbs? As it turns out, Wesley Warren Jr., the man who actually possesses this appendage has died at the age of 49. In this report, they discuss the cause of death:

No cause of death was officially announced, but Warren’s roommate, Joey Hurtado, told the Las Vegas Review-Journal that Warren had suffered two heart attacks recently.

Hurtado also told the paper he didn’t believe that his friend’s testicle removal surgery last year was a factor in the death.

When Warren had the surgery last April, he entered the operating room weighing 552 pounds. Thirteen hours later, he was 200 pounds lighter.

Needless to say, it’s practically impossible to exercise with 132lb scrotum that’s growing 3lbs a month, so I ain’t mad at the dude for becoming obese. But again, there had to be a remedy he could pursue, if he really were motivated.

According to his roommate, Warren developed infections that were brought on by diabetes, so that could have impacted things. Supposedly Warren said his scrotum first became enlarged in May 2008 when he suffered an injury on his right testicle.

“I woke up the next day and my scrotum was the size of a honeydew melon,” he told HuffPost Live in August. “My personal hell was just beginning.”

With every passing month, Warren’s scrotum grew 3 pounds or more. And with no health insurance, he had little opportunity to seek help, until he became internationally known for his freakish bulge.

I’m not making light of this, but I can’t imagine this man being denied treatment at an emergency room for what is an OBVIOUS emergency.

ObamaCare was just a bit too late to save Wesley Warren Jr.