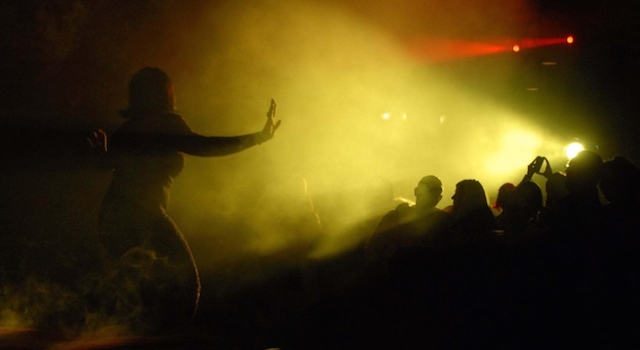 Troops based at the Kadena Air Base in Japan had a drag queen show Saturday night. Seriously.

How proud Obama must be. I can’t imagine what people who enlisted in the military think about this nonsense. If Obama wanted to decimate and demoralize the military, he certainly has achieved it.

This Week described the perverse event:

Troops based at the Kadena Air Base in Japan know how to party. On Saturday, six gay and straight service members applied some of their finest makeup and lip synced to “I Wanna Dance with Somebody” in what is believed to be first drag queen and king show on an American military base.

The show was thrown in support for the base’s recently formed OutServe-SLDN chapter, a nonprofit advocacy group for the army’s LGBT community.

Just a few years ago, performances like these would have been grounds for a possible discharge. The repeal of Don’t Ask, Don’t Tell has made it possible for events like this to occur.

It is also a sign of the times within the military; just a few years ago, gay and lesbian drag performances on a military base would have been unthinkable and potentially a cause for dismissal from the service.

The repeals of Don’t Ask, Don’t Tell, as well as the Defense of Marriage Act — the law barring the federal government from recognizing same-sex marriages — have allowed gays and lesbians in the military to be open with their sexuality for the first time.

The historic shift appears to be mostly accepted and embraced throughout the ranks despite warnings the DADT repeal could harm order and good discipline.

Any wonder why Putin invaded the Ukraine?

The U. S. military will soon be the laughing stock of the world, if it isn’t already.

How utterly sad that our military, the finest  fighting force in the history of the world, has been coerced and reformed into a politically correct arm of the government. DoD  has replaced “Don’t ask, don’t tell” with men dressing up in women’s clothes and brazenly entertaining the troops.

Any thoughts on what Chesty Puller or General Patton would have said? Likely we would not have been able print their response.