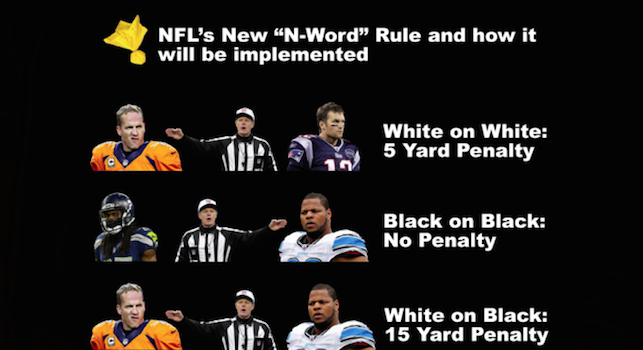 Are you confused about the new NFL rule on use of the N-word?

Well you are not alone. Soon there will be “gay” issues compounding and confounding things in the NFL, especially when the N-word is used in combination with the F-word that rhymes with gag. Football has finally become FUN again!

Legislating Language: Will the NFL Ban the N-Word?

One current All-Pro calls the idea ‘atrocious.’ But one Hall of Famer argues it’s dishonorable for today’s players to use the word. The NFL is now stuck in the middle as it considers passing a rule to penalize those who use it on the field.

The NFL Competition Committee has been meeting in Florida since Friday, and one of the items the eight men are debating is whether it should be a penalty if a player on the field uses the n-word. I am hearing it is unlikely a rule will be passed this year penalizing a player for using the n-word for the first time in a game. Three outcomes are possible:

1. The Competition Committee will urge that it be a point of emphasis for officials this year. When officials hear it, they would admonish players about it and do nothing else.

2. The committee will urge that offending players be warned if the word is used on the field during games. After a warning, a player with a second use could be penalized for using it, at the discretion of the officiating crew. I say “could be,” because the league could give officiating crews the option of throwing a flag, depending on the circumstances.

3. Nothing will change. Players will be allowed to use the word at will.

I believe a combination of numbers one and two is most likely. There is already a rule on the books that would allow an official to throw a flag for taunting and/or excessive foul language. But understand that the eight-man Competition Committee is not a legislative body. It recommends new rules, and owners vote on them

In celebration of the new NFL rule regarding the “N-word,” we created this graphic so that players will understand the penalties involved for usage of the N-word.

We are waiting on officials from the NFL to get back with us on the financial penalties that will be assessed on people for using the N-word. Rumor is as follows:

Chalk up another 10 points for politically correct race-baiters.