You likely know that failed cities are almost always run by Democrats. But what you might not know is how it all began.

It really is interesting to connect the dots on how the Top 10 Poorest Cities in the US are run by Democrats. Moreover, if that list grew to 100, I bet you’d be hard pressed to have five run by Republicans.

How can you have all this evidence of the failure of Democrats, yet they keep getting elected? 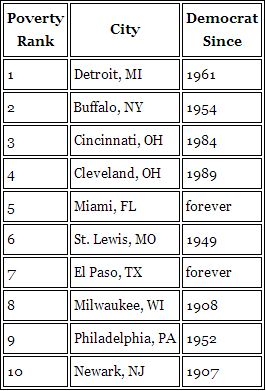 Scandal after scandal with these unprincipled Democrat politicians, and they keep electing another scoundrel, like 3rd-world African countries.

Two Harvard economists described the “Curley Effect,” named after Mayor James Curley of Boston who was elected to Boston’s Board of Aldermen in 1904 despite being in prison on a fraud conviction when the election was held.

Mayor Curley showed Democrats how to win elections by taxing productive people and channeling the proceeds to less well-off groups.  This bought Irish votes.  As taxes went higher, productive citizens who tended to vote Republican fled to the suburbs, which tipped the balance further and further in favor of Democratic candidates.

In cities like Baltimore and Detroit, registered Democrats outnumber Republicans by 8 to 1 or more.  Is it any wonder that they’ve become single-party cesspools with no hope for change?

Cities are echo chambers of ignorance, and nobody is injecting new messages. We just say, “Let the Democrats sort it out.” In other words, let the cancer spread. What are we waiting on, a super virus to infect all the city dwellers, so we can start fresh. It’s time we put a new message into the cities. Remind them of the American Spirit.