I have said for some time that something will break the stranglehold that Democrats have on the black community. It won’t be Republican leadership, so stop holding your breath. But Conservatives did get a “win” recently that has gone pretty much unheralded.

One would think Harry Reid has better things to do, like STOP KILLING VETS AT THE VA, a vote he recently passed on, but that wasn’t Wale’s issue.

In a series of tweets to over 3 MILLION FOLLOWERS, Wale discussed remarks by Harry Reid in 2008, where he called Obama being a ”light-skinned” African American with no “negro dialect.” 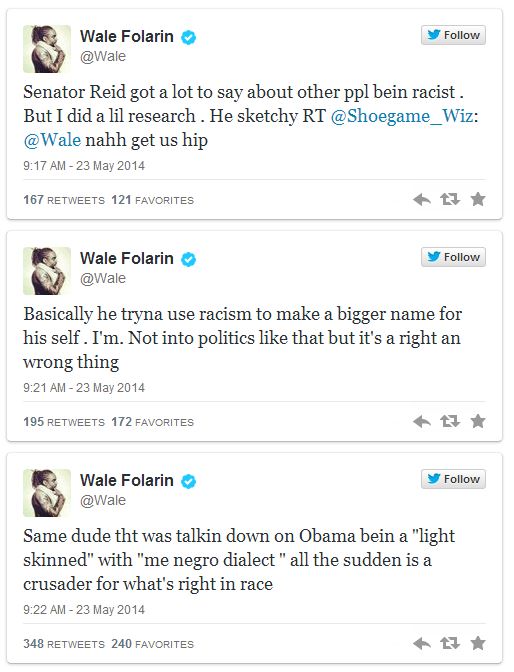 You might recall that there was no flashback from the black community at the time, because they were “all in” on Obama, and Democrat acceptance, racism notwithstanding was tolerated.

Well perhaps Democrat racism has come home to roost, as Wale went on to say that the Nevada Democrat uses racism to “make a bigger name” for himself.

The rapper’s tweets followed the reports recently that Reid and 48 of his Democrat colleagues in the Senate sent a letter to NFL Commissioner Roger Goodell urging him to change the Redskins team name.

The Republicans won’t do anything, but I suggest we Conservatives seize the day. This is much bigger than you might think, as rappers are paying attention.

Here is a short video of Wale on Forbes, where he discusses Ambition.