Politicians have protected themselves from campaign lies, so those snakes are off-limits, at least for the time being.

But when other paid stooges and bureaucratic operatives lie on behalf of politicians, they should not get a pass by proxy.

Economists play both sides against the middle, and are never held accountable. If they were flogged publicly for getting it wrong however, I think we might get a truer picture of the American economy.

For those wondering: the Obama economy is a pig on ice.

The world’s largest economy hit a bigger ditch in the first quarter than initially estimated, held back by harsh winter weather, a strong dollar and delays at ports.

Gross domestic product in the U.S. shrank at a 0.7 percent annualized rate, revised from a previously reported 0.2 percent gain, according to Commerce Department figures issued Friday in Washington. The median forecast of 84 economists surveyed by Bloomberg called for a 0.9 percent drop. By contrast, the report also showed incomes climbed, fueling the debate on whether GDP is being underestimated.

So economists TOLD Americans to expect the economy to grow by an anemic o.2 percent, and the economy actually SHRANK by 0.7 percent. So not only is the economy not growing at a healthy 2+ percent, it’s IMPLODING.

Yet Obama maintains that we are through the recession and creating jobs?  And I love this part, as these federally-funded liars try to give us hope. 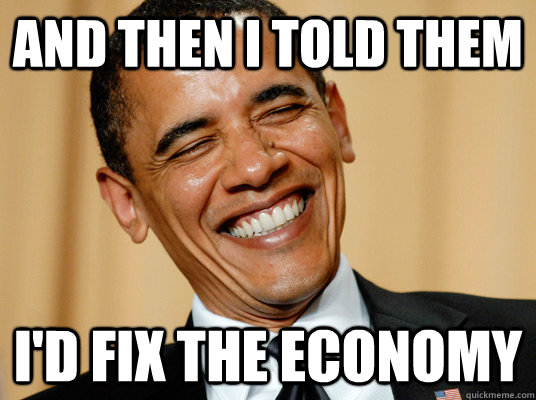