The visceral response Trump gets from some Muslims as he continues his campaign for the Republican nomination for President of The United States is beyond what I have ever seen in my lifetime. The message is abundantly clear, he has struck fear into the heart of Islam.

As it becomes likely that Americans will place either Trump or Cruz into the White House, the Muslim Brotherhood is responding out of a necessity. It appears they have strategically  joined forces with Black Lives Matter in order to bring about their Arab Spring here in America.

The protesters who showed up and shut down Trump’s rally in Chicago recently were definitely not there for a peaceful protest.

From the day Trump stated he would ban Muslims from entry into the country through resettlement until the process proved safe to Americans, he has worried Islamic leaders here in America, as well as around the world.

He also made a simple statement to Anderson Cooper in a recent interview that drew much attention.

It is apparent they do not want him to become president, because Trump would bring world attention to the nonsense of Islam as a religion.

At a Muslim American Society (MAS) Conference this past December in Chicago, several prominent Muslim Brotherhood affiliated individuals said some things that should jolt the authentic American awake from any political correct sleep they are under. See Conference Video

For example Nihad Awad, National Director for Council on American-Islamic Relations (CAIR) stated this about the 2016 elections,

The Muslim Brotherhood is essentially using the thugs of the BLM movement to do a lot of their dirty work, the nitty gritty work on the streets that they would rather leave to the grunts. Those in the BLM need to wake up to the fact that they are being used as slave labor for the Muslim Brotherhood and other rich and powerful entities like Soros.

I would imagine the BLM likes to think other movements are coming along-side to help them in their cause for “justice.” They are simply pawns in a chess game.

At the same conference, Khalilah Sabra, Executive Director and Project Developer for MAS said this of their motives and of using the BLM,

“We are prepared to unite for struggle, for blacks, for Hispanics, for Muslim. If we are not prepared to wage this struggle, we will fail, but first we need to make a conscious admission to ourselves that black lives matter.”

She admits that joining with blacks goes against what her audience feels, but they must decide that black lives matter, though she doesn’t necessarily believe it to be true. She encourages the union as a means to an end. The end is a revolution in America that would give Muslims a bigger foothold in our country with the end result being an Islamic America ruled by Sharia.

“That we are a community that staged a revolution across the world. If we can do that, why can’t we have that in America?”

I guess it wasn’t caused by the video after all.

One prominent Imam from Chicago thought it would be a good idea to encourage mayhem at the Trump rally in Chicago. Abdul Malik Mujahid was born in Pakistan and apparently has been included in a list of the Most Influential Muslims. He is very involved in coaching Muslims on how to vote.

“Trump is going to be in Chicago on March 11th at UIC. Any ideas what Muslims, Blacks and Latino should plan on doing. I am quite sure that Chicago media will cover the protest well.”

Consider if this kind of tweet came from a Christian Pastor or a Rabbi and was targeted at a Hillary or Bernie rally. It would ruin their reputation, not to mention the coveted 501c3 status of their church or Synagogue. More importantly this tweet reveals a strategy of using Black Lives Matter and Latinos to cause active revolt and a desire for violence.

The Muslim Brotherhood and Black Lives Matter pose a threat to our personal security. This is not some movement for “civil rights”.  They are infringing on the rights of Americans to peacefully gather and express their first amendment rights. Those same rights that gave the BLM protection, as they marched down a street in Minnesota last year chanting, “Pigs in a blanket, fry ’em like bacon.”

One group, the Muslim Brotherhood, is already being considered by our House of Representatives to be designated as a Foreign Terrroist Organization, the other, BLM, needs to be investigated as well, since they are now linked to that organization which poses a threat to the American public. 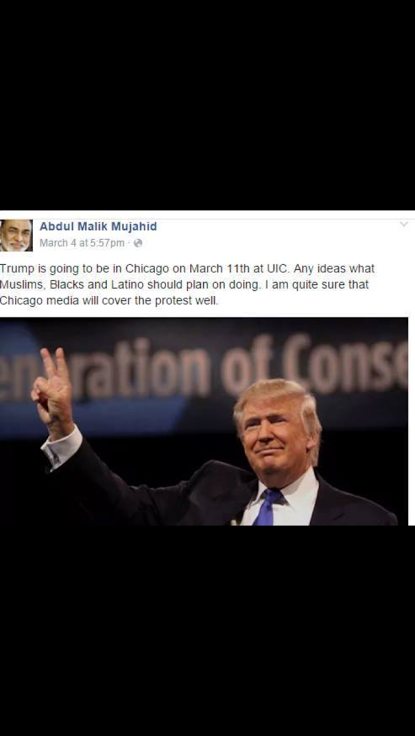