I’m curious as to how Obama will turn this Muslim terrorist attack that killed 30 people in China into a gay gun story?

However, as NBC reports, only knives were used.

A group of knife-wielding men attacked a train station in southwestern China on Saturday, killing at least 29 people and injuring more than 130 others in what Chinese officials called a terrorist strike, the official Xinhua News Agency said.

Four of the attackers were also shot dead and only one was captured alive after the mayhem, which broke out about 9 p.m. (8 a.m. ET) at the Kunming Railway Station in the capital of southwest China’s Yunnan Province.

Ethnic Turkish Uighur separatists have been sporadically fighting for an independent state in Xinjiang, in northwestern China, home to about 10 million Uighur, who are predominantly Muslim. More than 100 people have been killed in protests in Xinjiang in the past year.

Yang Haifei, a resident of Yunnan, told Xinhua that he was attacked and sustained injuries on his chest and back.

Yang said he was buying a ticket when he saw a group rush into the station, most of them dressed in black, and started stabbing people.

Obama and other anti-gun NUTCASES know that these terror attacks are about ONE THING: RADICAL ISLAM.

It’s time this nonsense ends, and the world recognize the ideology of hate that the Left wants to pawn off on the world as a religion. 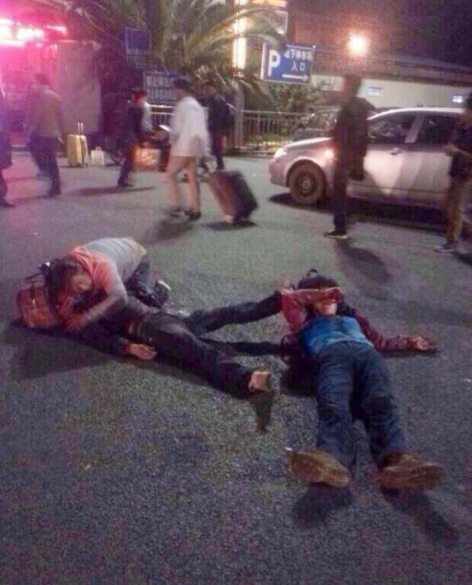