I fully expected to read the headline, “Ellen Degeneres marries David Duke,” given the brouhaha over her picture with Usain Bolt.

Leave it to the Left to showcase their abject ignorance to themselves. Who could possibly believe that Ellen Degeneres is a racist?

Ellen is the poster child of almost all things Liberal. She’s gay, and she did it the right way. She came out. 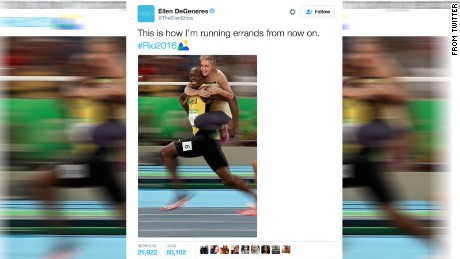 But being gay doesn’t give Ellen Degeneres a pass, when it comes to potentially not understanding her racist underpinnings.

Such is Liberalism, as it often attacks itself. Actually, it always attacks itself eventually. Whether it’s white Liberals ignoring the inherent racism of “Black Lives Matter,” or the report of Muslim terror groups existing in all 50 states, you can count on Liberals to rationalize.

The trail of contradictions is endless. However that doesn’t stop the Left from promoting their silly ideologies, even when that ideology is against their own.

What has Ellen done that remotely appears racist? Answer: nothing. But that’s exactly what it takes…nothing.

Let’s put in context what the Left tried to do to Ellen, in what they are trying to do to Donald Trump. When you do that, you can certainly see how deranged and dangerous the Left are.

But Ellen is not running for president. Nor has Ellen in any way ever been perceived as racist. Quite the contrary. So this attack, completely unprovoked is disconcerting, even for the Left.

Nevertheless, the attack is also very revealing. The attack proves that there need be no substance in the accusation of racism for an attack by the Left to occur. They are trained attack dogs, pure and simple.

Usain Bolt and Ellen are friends. But for the Left, even friends can’t have a harmless joke. That joke by the way had no racial overtones, except what Leftists chose to see.

This is why there is so much money in race pimping.