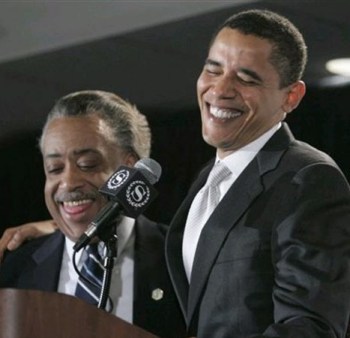 Moreover, Sharpton taxes have been a topic of discussion for quite some time, as he never seems worried about paying them. Further, the man has given every excuse to avoid payment, and even burned down his offices to get an extension.

Sharpton’s biggest tax avoidance strategy came as he defended Barack Obama. Because of his association with Obama, the IRS intimidated white Conservatives, and laid low with Sharpton.

However the steak and potatoes days may have ended for Sharpton, as the Ramen noodles cometh.

Obama may have unwittingly doomed Sharpton, and he won’t have his magic Negro to bail him out.

According to the US Chronicle,

The New York Times reported that Al Sharpton was behind on his taxes, and the amount owed was incredible. With personal federal tax liens of $3 million and an additional $777K in state tax liens, plus the $717K in federal and state tax liens against his “non-profit” organization, Sharpton is looking at a grand total of $4.5 million in taxes owed.

Sharpton may be facing a new set of problems after the enactment of H.R. 22, otherwise known as the FAST Act. A White House Press Release described what the bill was meant to do:

H.R. 22, the “Fixing America’s Surface Transportation Act (FAST Act),” which authorizes budgetary resources for surface transportation programs for FYs 2016-2020; reauthorizes taxes that support the Highway Trust Fund through September 30, 2022, and expenditures from that Fund through October 1, 2020; reauthorizes the Export-Import Bank through September 30, 2019; and improves the Federal permit review process for major infrastructure projects.

Though the bill deals mostly with funding issues for the Transportation Department, tucked in near the bottom of the text is the language:

In General.—If the Secretary receives certification by the Commissioner of Internal Revenue that an individual has a seriously delinquent tax debt, the Secretary shall transmit such certification to the Secretary of State for action with respect to denial, revocation, or limitation of a passport pursuant to section 32101 of the FAST Act.

What this means, is that anybody who has a seriously delinquent tax debt, described as $50,000 or more, and a lien against them, that American citizen may have their passport revoked, and their ability to move freely and legally from America to another country and vice versa will be taken away.

This legislation was written for people like Sharpton. Deadbeats.

Obama signed the bill into law at the beginning of the year, so ironically, Sharpton may be losing his passport soon. And you can bet if it happens, President Trump will tweet about it.