There’s been a leak, and the Democrats won’t like it.

Recently, Hillary Clinton asked where Wikileaks was. She insinuated that they were only after her.

Julian Assange said publicly that Wikileaks doesn’t show favoritism. Had they uncovered information on Donald Trump, it would have been showcased. But there was plenty of dirt on Clinton, as we all know, including leftists.

Recently a hacker site called “Cyber Berkut” published links between the Ukrainian government and the Hillary Clinton Campaign. According to Cyber Berkut the Ukrainian foundation transferred 10 to 25 million dollars to the Clinton Foundation.

We have been discussing this for quite some time, connecting the dots between the Clintons and the Russians. Yet, the fake news media has all but ignored it. In fact, one of the key money launderers was recently interviewed, and had the nerve to continue to say there is a Trump-Russia connection.

More on Podesta in just a bit…

As the Gateway Pundit wrote:

A whistleblower provided a very damaging email showing that the Democrats were plotting to ‘manufacture false evidence of the Russian security services’ involvement in cyber attacks during the U.S. presidential elections 2016′.

Below is a screenshot of an email provided by a whistle-blower showing the Democrats plotting to blame Russia for cyber-hacking.

“We all agree there is a need to provide technical details on Russian hacking. (Redacted) urges you and (redacted) to bring up again the issue with (redacted). It’s quite important, especially as we approach the hearings.

If there are no technical details we have to find some by all means. I am sure his guys can do it.”

Cyber Berkut stated that they redacted the names in order not to expose their sources:

We cover the names of the provocation facilitators in order not to expose our sources. It is worth saying, a famous American politician and major financier took part in the plot.

Read the rest of the report on ‘Cyber Berkut’ here.

For those who want to believe the Russians are involved, remember this.

Wikileaks unveiled what they dubbed ‘Vault 7’ on March 7th in their largest CIA document drop yet. One of the documents revealed that under a project named ‘Umbrage,’ the CIA maintained a library of Russian cyber-attack techniques ‘stolen’ from malware.

So not only can we mimic the Russians, we can frame them too. Apparently the CIA can leave ‘fingerprints’ of Russian style hacking. 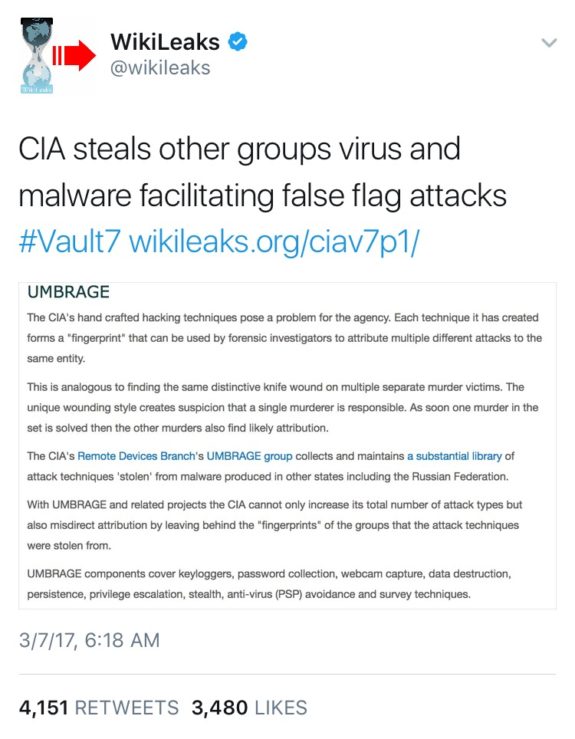 In case you need a bit more information about Podesta, and his attachment to both the Clintons and Obama, check out this video.