If you watch CNN or other fake news networks about the tragedy in Parkland Florida, you can’t help but notice the latest poster “child” for the gun-control freaks.

Introducing David Hogg, the son of a former FBI agent. The platitudes lavished on this “kid” by the fawning fake news media would give you a cavity, it’s so dripping with sugar.

But what is the real truth about David Hogg?

What we know is that the Left hire “crisis actors” to appear all over the country based on particular events. For example, during the Era of Black Angst, the Left produced DeRay McKesson and Shaun “I really am white” King. The social justice warrior movement was revived, replete with a new set of pimps.

Now we learn that David Hogg may very well be one of them as well. Kim Dutton made this post of David Hogg: 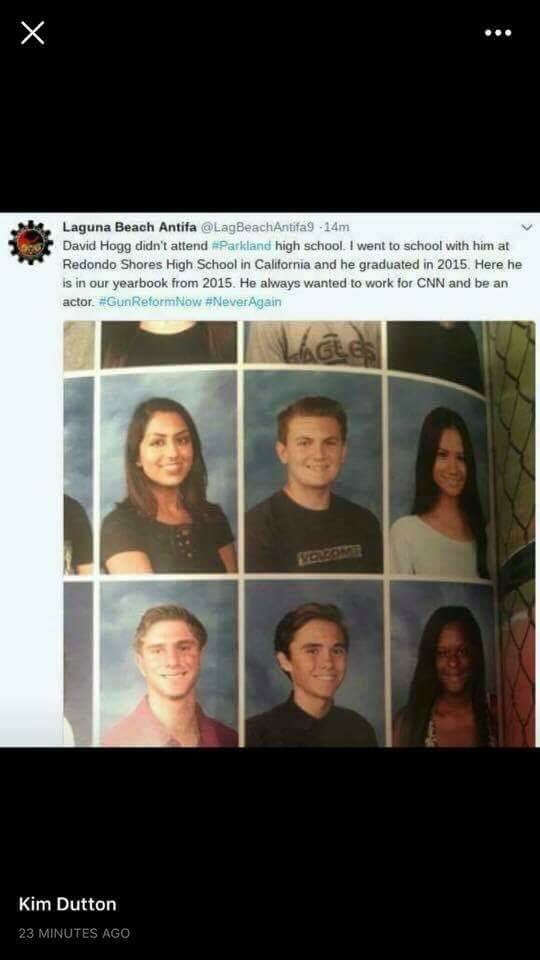 Then, we have this little gem of a Snapchat video that has been swirling around social media. In the video it appears David Hogg is playing around with other students when one of his friends made fun of him saying, “I don’t even know why this kid is here he’s like 25 and isn’t even in high school!”

This video appears to confirm the so called “conspiracy theories” that Hogg is indeed NOT a high school student.

Instead, he is more likely the Left’s new puppet to furthering their political agenda.

The suspicions of Hogg began with aggressive coverage of him by CNN and other Leftist media outlets in the aftermath of the mass shooting in Parkland. They quickly focused on Hogg as the spokesperson for the new gun-control narrative, circa 2018

But people caught on. Thus, the fake news media received a lot of backlash by over politicizing the shooting. They used the survivors to pull on Americans heart strings.

“There’s been unfortunate media handling of these traumatized children. They’ve used them as ways to enact what they always like to do, a gun control agenda,” she said before referencing CNN’s upcoming town hall.

“These children aren’t forcing their ways on to CNN, town halls, or covers of magazines. Media is choosing them to put there, to shut down debate and keep people from having a conversation about gun control.”

Jim Hoft of The Gateway Pundit took notice of a boy named David Hogg who has has been astonishingly articulate and highly skilled at propagating a new anti-Conservative/anti-Trump narrative behind the recent school shooting.

The suspicion behind CNN using Hogg’s was this video which clearly shows a CNN reporter couching Hogg’s through his lines. Hogg’s is seen asking for re-takes as he stumbles to say what was written for him.

This uncovered video of teen anti-Trump/anti-gun activist David Hogg, which shows he was heavily coached on lines and is having trouble reciting his script, is being REMOVED and CENSORED from social media and YouTube. They don't want anyone else to see it.

You know what to do. pic.twitter.com/CaUMX4s72y

Since then, Hogg’s has appeared on multiple major news network giving anti-Trump and anti-gun interviews.

Still, the fake news media holds to their lie saying all their reporting thus far has been legit. Further, they insist they are not using paid “actors” to further their agenda.

“I’m not a crisis actor,” Hogg told CNN’s Anderson Cooper on “AC360” Tuesday. “I’m someone who had to witness this and live through this and I continue to be having to do that.”

Did the left not think that we would eventually find out about this so-called kid’s real age? Or his past associations? Do they even do their homework before lying to the American public?

I’m no journalist, so do your own homework. But what I will tell you is if Hogg really did graduate in 2015 and is a 20-something-year-old impostor, I would not be surprised.

And who would employ such an impostor? The Democrats, of course. These are the same people who I suspect paid a teacher recently to discharge a firearm inside his classroom.

As we’ve learned from the Left, their treachery knows no end. It’s truly boundless.

Just look at what the entire Obama administration attempted to do to Donald Trump. And even when caught, they continue the ruse.

Don’t expect the media to apologize once we know definitively that Hogg is a 20-something crisis actor.