Just when you thought California couldn’t get any crazier a new picture emerges giving more insight into the inner suffering of Californians. 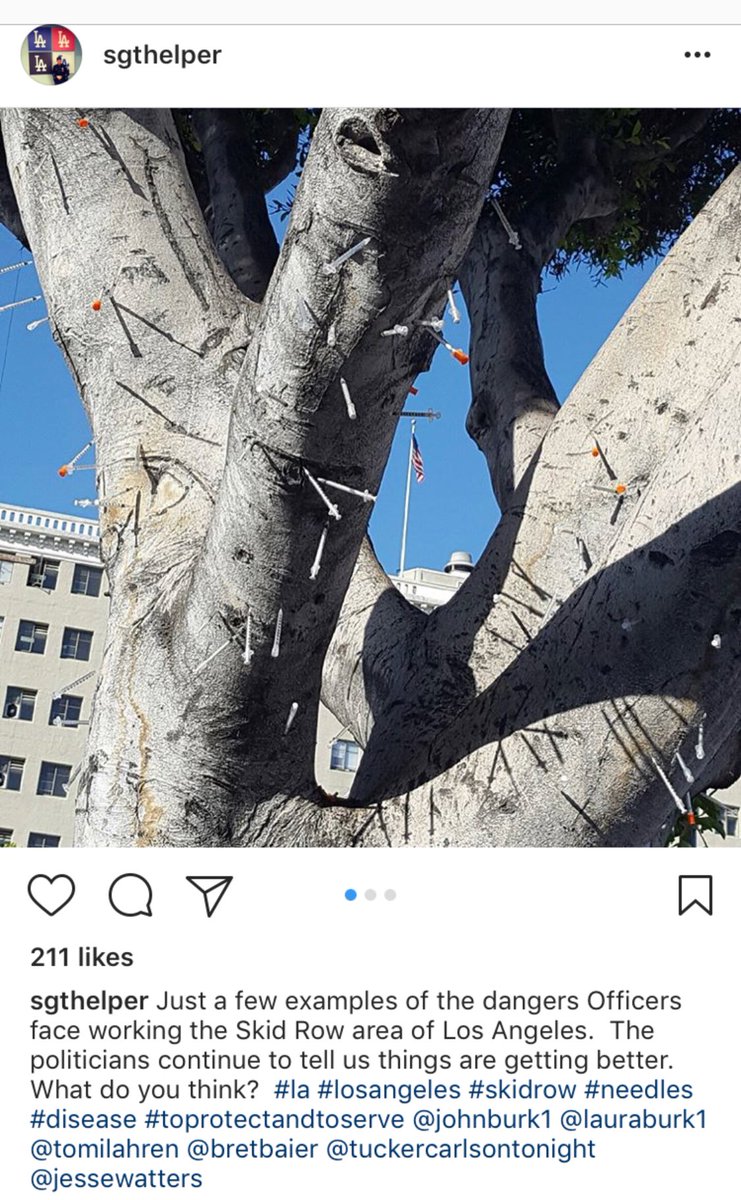 The state with the craziest governor in history has people so doped up, they are attacking trees.

As you look at the hypodermic needles sticking out of the poor tree, try to imagine the scene surrounding it. I’m betting this was once a nice neighborhood. But now the neighborhood appears to be overrun with junkies looking for a Starbucks bathroom.

Where are the tree huggers to protect that damn tree?!

With all the environmentalists around, one would think at least one tree hugger would camp out in order to protect that tree from AIDS. Given Moonbeam’s new law that passing along HIV/AIDS knowingly is no longer a felony, that tree has little recourse.

Maybe the tree has had a problem for years? In California, anything is possible. Apparently poverty and despair in CA is so rampant, that vegetation wants out of its misery. My bet is after a few years living under Moonbeam that tree asked to be put out of its misery–a mercy killing as it were.

Another group missing are the #MeToo harlots.

This tree was obviously molested at some point, likely as a sprout. Does anybody think that tree voluntarily asked to be openly poked so many times?

Did this tree try out with Harvey Weinstein for a part? Because that would certainly prove that California is a Utopia.

The junkies multiplying throughout California is just one of its problems. Recently the state was named the poorest among the nation.

According to new statistics released last month by the United States Census Bureau the blue state Utopia has more people suffering from poverty than another state in the nation.

In its report, the Census Bureau used cost of living to determine poverty level. The report utilized a standard called the “supplemental poverty measure,” or SPM, which incorporates various factors including expenditures on food, clothing, shelter and utilities, as well as geographic variations, in housing costs.

Considering how California throws money away at every problem, who’s shocked.

But that’s not all! The crazy Governor Jerry Brown has decided to add to his people’s misery by signing a law that states California citizens are no longer allowed to do laundry and shower on the same day.

Yes, you read that right. In two bills that were signed into law last week, they state:

“Help California be better prepared for future droughts and the effects of climate change.”

Senate Bill 606 establishes a “governing body” to oversee all water suppliers, both private and public and will require extensive paperwork from those utility companies.

Assembly Bill 1668 is where it gets personal.  This establishes limits on indoor water usage for every person in California and the amount allowed will decrease even further over the next 12 years.

To make a long story short, now that these bills are law, it’s illegal to take a shower and do a load of laundry in the same day because you’ll exceed your “ration.”

And what if you don’t comply with these news laws? Well, it might be way cheaper to move. Here are the fines Californians will be looking at PER DAY.

1: If the violation occurs in a critically dry year immediately preceded by two or more consecutive below normal, dry, or critically dry years or during a period for which the Governor has issued a proclamation of a state of emergency under the California Emergency Services Act (Chapter 7 (commencing with Section 8550) of Division 1 of Title 2 of the Government Code) based on drought conditions, ten thousand dollars ($10,000) for each day in which the violation occurs.

(2) For all violations other than those described in paragraph (1), one thousand dollars ($1,000) for each day in which the violation occurs.

With all these crazy laws California citizens are forced to live by its no wonder why some resort to a life of a junkie.

No wonder level headed American are fleeing the place in droves.

But don’t expect crazy California leftists to see the light. The state is too far-gone.