In the aftermath of the Tree of Life Synagogue massacre and the discovery of a series of mail bombs last week, the leftist media insisted President Trump is the source of all division in America.

For example, leaders of Bend the Arc, a Pittsburgh Jewish advocacy group, said President Donald Trump is not welcome in their city until Trump “denounces white nationalism.”

Then, you have Andrew Gillum, a radical leftist running for a Senate seat in Florida. He recently told his supporters that “Trump gives cover to racists,” and so on and so forth.

And to prove further that the left is vindicated in blaming Trump, the media decided to poll registered voters. Of course, they expected a little back up for their claims.

But the poll backfired on them, miserably.

According to POLITICO/Morning Consult poll:

In the new Morning Consult/Politico poll, 64 percent of registered voters said the press has done more to divide the country than unite it since Trump took office, compared with 56 percent who said the same was true of the president. The poll of 2,543 voters was conducted Oct. 25-30, after news first broke of mail bomb suspect Cesar Sayoc’s attempted acts of politically motivated violence and amid news of a shooting by suspect Robert Bowers at the Tree of Life Synagogue in Pittsburgh.

And why wouldn’t the media bare more responsibility?

Unlike them, President Trump and Republican leaders always quickly condemn any violence of any sort no matter which side of the political aisle it may occur.

However, it is the media in this country that actually protects and gives cover, as they like to call it, to the violence we see happening day after day.

Take for example CNN. They actually produced a headline defending the radical fascist group ANTIFA for their terrorism as, “seeking peace through violence.” 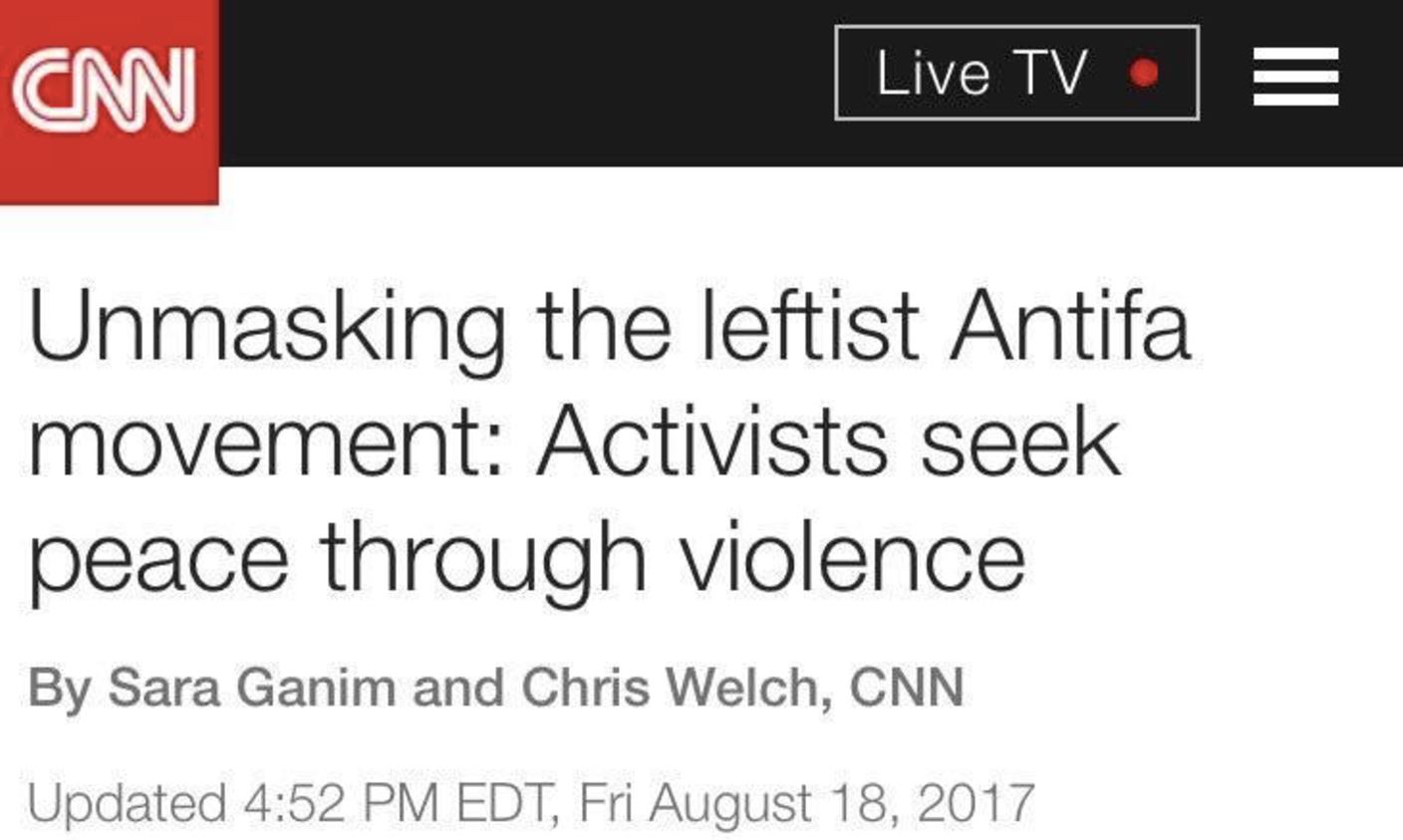 Does that title seem to “give cover” for the terrorism ANTIFA produces wherever they go?

Do we see any outcry from the leftist media when this particular group burns things down, stops conservatives from speaking, or physically attacks anyone with whom they disagree?

Of course after many pointed out the absurdity of that headline CNN updated the titled.

So, not only do we have the leftist media defending the actions of these radical groups, we have actual leaders in the democrat party blatantly calling for these attacks to continue.

Let me remind the media of their leaders statements.

You have Hillary Clinton in an interview recently saying:

“You cannot be civil with a political party that wants to destroy what you stand for, what you care about,” Clinton said in an interview with CNN’s Christiane Amanpour. “That’s why I believe, if we are fortunate enough to win back the House and or the Senate, that’s when civility can start again.

Additionally, you have Eric Holder’s remarks of, “when they go low we kick them.”

Holder later defended his remarks and told the public to stop with the “fake outrage” that he was clearly telling Democrats to be tough, not violent.

But if words do indeed matter, as the left insists, Holder’s comments were rightfully challenged.

Then you have Maxine Waters. Another Democratic moron who gathered a few supporters around her recently as she yelled:

“Let’s make sure we show up wherever we have to show up. And if you see anybody from that Cabinet in a restaurant, in a department store, at a gasoline station, you get out and you create a crowd. You push back on them. And you tell them they’re not welcome anymore, anywhere.”

And what do we see come of this?

Well, we see Sarah Sanders and her family thrown out of a restaurant due to the owner and its employee’s who do not like the president.

Last night I was told by the owner of Red Hen in Lexington, VA to leave because I work for @POTUS and I politely left. Her actions say far more about her than about me. I always do my best to treat people, including those I disagree with, respectfully and will continue to do so

Furthermore, we have Ted Cruz, Mitch McConnell, and others assaulted and harassed as they are eating in public.

Additionally, there has been the poison ricin sent to Trump, his family, and cabinet members.

We see radical Hollyweird depict Trump’s assassination. They’ve attacked it from every angle-  whether its in the form of a play, music videos, or Kathy griffins so-called “comedy stunt.”

And then you can’t forget the shooting that almost claimed Steve Scalise’s life at a baseball game full of other Republicans.

Now, to be consistent, of course Democrats as a whole cannot bare responsibility for heinous acts of groups or individuals.

Individuals make personal choices of their own will.

However, the difference is Democrat leaders are flat out ENCOURAGING this type of behavior, not condemning it.

And what does the leftist media expect to happen to the country after referring to Donald Trump as “literally Hitler’ and a “racist” for nearly three years?

Of course when Donald Trump defends himself and his supporters by calling out the media for the hacks and liars they really are they have the gall to point the finger back at him as the instigator.

The President had this to say recently on Twitter:

And he is right.

The media has a huge platform and has the ability to reach millions of people all day everyday.

And use the type of language against the president, refusing to condemn Democrat leaders rhetoric, and denounce violence is irresponsible.

And for that the leftist media will continue to bare much more responsibility for the division in this country.

I, for one, am glad this poll reflects the real American people. We are smart and we see right through the media’s charade.