Ever since the Mueller Report was released, Democrats run around like sprayed roaches.

At one point, they blamed Mueller. Apparently he didn’t finish the coup to their satisfaction. Democrats’ consternation continued when Barr issued his summary of the report.

Then, Democrats had a new target. Particularly when Mueller got the “memo”, and issued a statement somewhat disagreeing with Barr’s summary.

Democrats had new fuel for their “con job”. So instead of calling Mueller to testify (a big mistake), Democrats called Barr to testify.

The media pinned Barr’s appearance before the House Judiciary committee a “grilling”. Look at the term used by multiple media outlets: 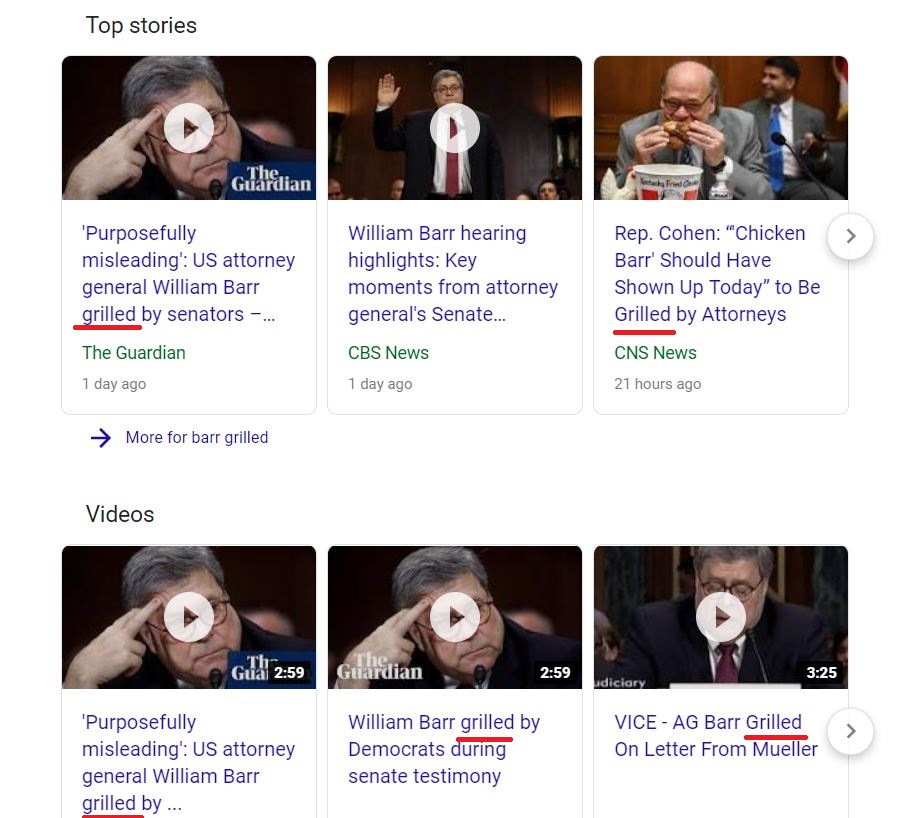 The Guarding has Barr being “grilled”.

Inside of the CBS News story, you can find them discussing Barr:

A defiant Attorney General William Barr defended the way he oversaw the release of special counsel Robert Mueller’s report in a hearing before the Senate Judiciary Committee on Wednesday. His appearance followed the revelation Tuesday that Mueller had confronted Barr about his public characterization of the report.

Barr told the committee Mueller was concerned press coverage of Barr’s March 24 letter to top lawmakers and the public had been “inaccurate.” He conceded Mueller urged him and the Justice Department to release the executive summaries prepared by the special counsel’s office. In his letter to Barr, Mueller said the Justice Department’s summary of the report threatened to “undermine” public confidence in the investigation.

But Barr stressed it was up to him to determine what information to disclose and when to do so once the special counsel submitted his findings. “At that point, it was my baby,” Barr told lawmakers, referring to Mueller’s 448-page report.

So Why Won’t Democrats Back Down?

Mr. Barr played along patiently enough through ridiculous questioning before the Senate Judiciary Committee. And the only thing he received for his service was a ton of insults wrapped up with a side of bad news coverage. Liberals described a once well-regarded lawyer with adjectives fitting of James Comey, as he was called a lawbreaking, dishonest, obstructing hack who is a puppet for the President. Nancy Pelosi called his testimony criminal. And Comey, well, Comey said Trump has “eaten” Barr’s “soul” which is pretty ironic coming from such a soulless lowlife. Then we have liberals like Pocahontas demanding resignation or impeachment of Barr.

So what has the Democrats so twisted inside? Of course, they’re pretty upset that Mueller’s report didn’t nail the President. And the only thing they can do is attack Barr for his delivery- even though the redacted report wasn’t gleaming in favor of Trump. Therefore, Barr’s honesty really shines. Democrats should have no objections.

But they do, and here’s why.

While everyone is focused on the insults thrown at Barr, none of the mainstream media outlets zeroed in on the coming investigations. The AG found complete satisfaction with the results of the Mueller report. Now, he wants to know how it all started. From here on out, Barr will do the grilling.

Barr is going to dissect the origins of the Russian investigation, including the surveillance warrants and the infamous “Steele dossier” along with all the leakers spewing classified information. At the end of Barr’s probe, you can bet charges two things happen. First, charges will be filed. Second, prosecution will commence.

In fact, Proof of “SpyGate” recently emerged in a New York Times piece detailing the name of one Trump spy. Like they say, where you see one rat, hundreds more are still hiding.

“The only thing Democrats can hope is to prevent mass incarcerations by giving America a few high-level sacrificial lambs. Because their entire crooked infrastructure burns to the ground otherwise.”

If you ask me, they should start with Hillary Clinton. I’m willing to bet if AG Barr put Clinton behind bars, he’d be decorated as a National Hero. I can see it now. We’ll have the first annual “Barr Parade” in which we celebrate Clinton behind bars.