Democrats are busy holding hearings because, as they say, they don’t know the full truth behind the Mueller Report.

Funny thing is, they were offered the truth, but refused to read it.

Suddenly, I hear Jack Nicholson. “You want the truth? You can’t handle the truth!” 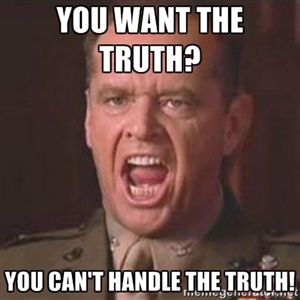 Because truth is, Democrats don’t give two shits about the Mueller Report. They just need to keep dragging this thing through the mud until election night, 2020. And when Trump wins again, they’ll look for something else to investigate.

Yesterday, AG Barr stood up to the liberal powers that be and send them a strong warning.

“We have to stop using the criminal justice process as a political weapon!”

Honestly, the Mueller Report should have put the 2016 campaign to bed. No collusion, no obstruction. That’s the answer, plain and simple. But if Democrats accept this, they’re fresh out of leverage against the President.

Thus, the only strategy leftists can implore is to investigate the investigation, and pretend Mueller didn’t tell the whole story. Frankly, Barr’s had enough, and he not the only one.

Justice Department officials chided congressional Democrats this week for ignoring a less-redacted version of Special Counsel Robert Mueller’s Russia report made available to them, even as they pursue a subpoena for the full document and accuse the department of stonewalling.

The DOJ released a statement hours after Attorney General William Barr had testified to the Senate Judiciary Committee for more than five hours, answering questions about the department’s handling of the report’s release last month. Along with a letter denying access to the completely unredacted report and other files, the statement said that Democrats, including House Judiciary Chairman Jerry Nadler, D-N.Y., had “refused” so far to review a version of the report with far fewer redactions.

So basically, leftists are wasting our tax dollars to hold hearings regarding information they could easily read for themselves? Does it get any more ridiculous?

“The Attorney General also voluntarily released the Special Counsel’s confidential report with minimal redactions to Congress and the public, made an even-less redacted report available to Chairman Nadler and congressional leadership (which they have refused to review), and made himself available to the Committee by volunteering to testify this week,” spokeswoman Kerri Kupec said.

Democrats had objected to Barr’s decision to transmit the report to Congress with redactions, and Nadler has subpoenaed the full report along with underlying materials. But Assistant Attorney General Stephen Boyd, in the letter to Nadler on Wednesday, said the less-redacted version already available to key members “would permit review of 98.5 percent of the report, including 99.9 percent of Volume II, which discusses the investigation of the President’s actions.”

“Regrettably, before even reviewing the less-redacted version or awaiting the Attorney General’s testimony, you served a subpoena …” he wrote. “You served such a subpoena knowing that the Department could not lawfully provide the unredacted report, that the Committee lacks any legitimate legislative purpose for seeking the complete investigative files, and that processing your requests would impose a significant burden on the Department.”

One GOP lawmaker said the key section on obstruction in the version that Democrats have ignored contains just four redactions.

Rep. Doug Collins and Sen. Lindsey Graham are the only lawmakers who took the time to view the full report, and both agree the redacted versions don’t change Mueller’s findings one bit. There is still no evidence of collusion or obstruction. But Democrats don’t want to face the facts. Thus, it’s much easier to hold a hearing to beat a dead horse instead.

Yesterday, Texas Senator Ted Cruz proclaimed Democrats are subjecting AG Barr to Kavanaugh-level slander. And Lindsey Graham added, “you slandered this man from to to bottom.” Still, Democrats have yet to form an end-game.

It would be great if the left could abandon this pathetic harassment of the President. Just think what could be accomplished with all the time and money we’re wasting repeating the same efforts again, and again.

The roughly $13m tabulated at last count would go a long way in building border walls. Or, it could provide housing for the homeless, or healthcare to the needy. Don’t democrats like to give out free stuff? Or better, it could be used to finally investigate the Clintons for their massive crime spree spanning several states and decades.

But I suppose that’s just wishful thinking because liberals would rather stick it to Donald Trump, the first politician in many years to keep his promises and restore America to greatness. How dare him!