Things just got worse for the Clintons.

Bill Clinton’s sexual shenanigans weren’t limited to chubby interns. As it turns out, Clinton’s relationship with other sexual deviants has come home to roost.

Hillary Clinton’s “not so secret weapon”, her husband, will be part of her undoing. And soon the #MeToo movement will have another Leftist whipping boy to ignore.
Along with what we will soon learn about Russian collusion of Democrats, we will also learn about another cover up. Epstein Island.
Bill Clinton was a frequent visitor. He issued a statement on Epstein’s legal troubles in an attempt to get ahead of the story. But it backfired. 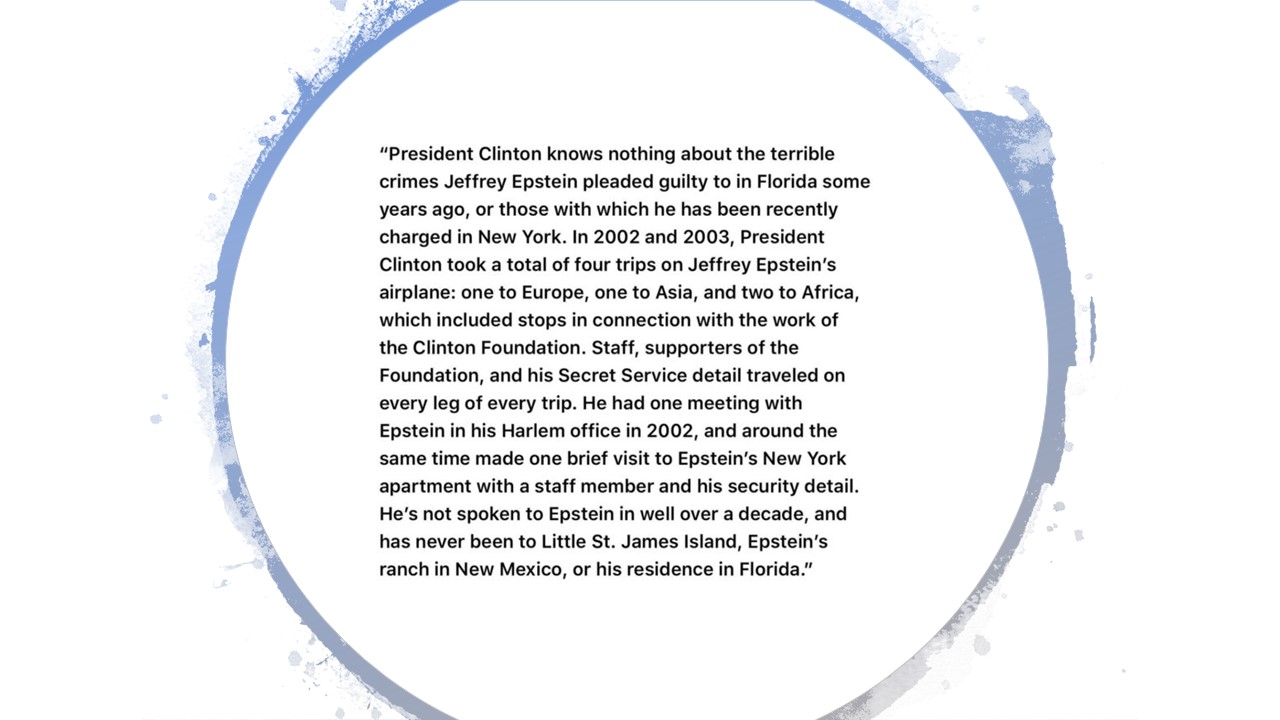 Of course, leftists are dying to defend Clinton. But there’s one tiny problem with his story.

Former President Bill Clinton was a much more frequent flyer on a registered sex offender’s infamous jet than previously reported, with flight logs showing the former president taking at least 26 trips aboard the “Lolita Express” — even apparently ditching his Secret Service detail for at least five of the flights, according to records obtained by FoxNews.com.

Clinton’s presence aboard Jeffrey Epstein’s Boeing 727 on 11 occasions has been reported, but flight logs show the number is more than double that, and trips between 2001 and 2003 included extended junkets around the world with Epstein and fellow passengers identified on manifests by their initials or first names, including “Tatiana.” The tricked-out jet earned its Nabakov-inspired nickname because it was reportedly outfitted with a bed where passengers had group sex with young girls.

“Bill Clinton … associated with a man like Jeffrey Epstein, who everyone in New York, certainly within his inner circles, knew was a pedophile,” said Conchita Sarnoff, of the Washington, D.C. based non-profit Alliance to Rescue Victims of Trafficking, and author of a book on the Epstein case called “TrafficKing.” “Why would a former president associate with a man like that?”

Does anyone else find themselves saying “define sexual relations” in their head right now? Because once again, Bill Clinton tries to use a play on words to get away with an abomination. Clinton doesn’t actually say he only flew Lolita Express four times. However, his wording makes you believe that’s his claim when he says he took just four trips between 2002 and 2003. What he’s leaving out is the list of flights that occurred during other years.

From Bad to Worse

One of Epstein’s victims saw Clinton on the island.

Virginia Roberts, 32, who claims she was pimped out by Epstein at age 15, has previously claimed she saw Clinton at Epstein’s getaway in 2002, but logs do not show Clinton aboard any flights to St. Thomas, the nearest airport capable of accommodating Epstein’s plane. They do show Clinton flying aboard Epstein’s plane to such destinations as Hong Kong, Japan, Singapore, China, Brunei, London, New York, the Azores, Belgium, Norway, Russia and Africa.

Among those regularly traveling with Clinton were Epstein’s associates, New York socialite Ghislaine Maxwell and Epstein’s assistant, Sarah Kellen, both of whom were investigated by the FBI and Palm Beach Police for recruiting girls for Epstein and his friends. 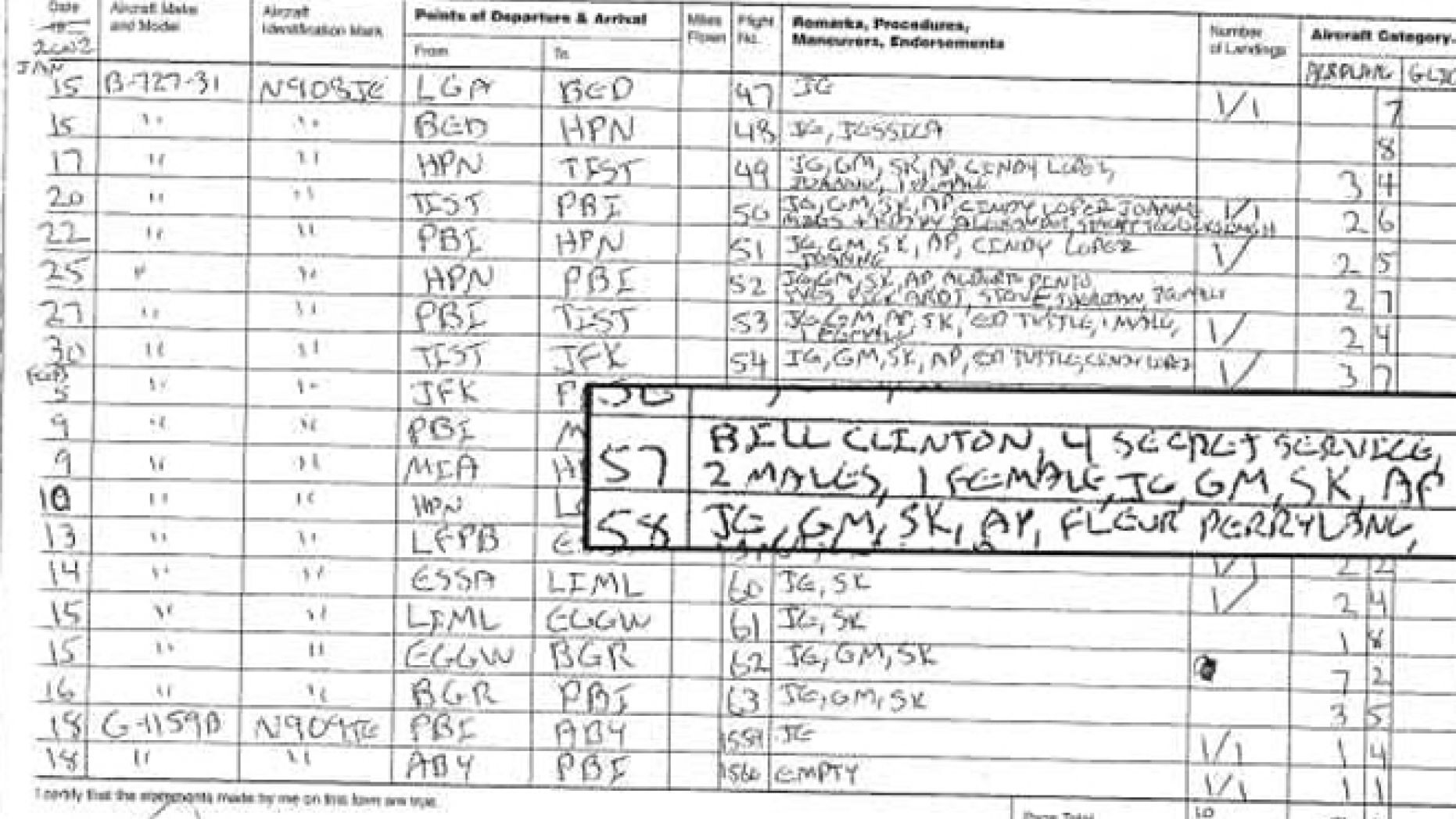 What about the Secret Service?

It’s pretty fishy that the secret service has records of some flights, but not others.

In response to a separate FOIA request from FoxNews.com, the U.S. Secret Service said it has no records showing agents were ever on the island with Clinton.

When Fox contacted Clinton representatives, they refused to comment further on the matter. Thus, the Clinton Library was contacted. They said they do not track Clinton’s travel plans. Thus, we have nothing from the Clinton camp other than a statement full of holes and irregularities.

Unfortunately, Epstein managed to molest hundreds of young girls. Even after he faced legal trouble once before. Sadly, predators never stop hunting their prey.

The only question left is just how involved is Bill Clinton in Epstein’s circle? Because it doesn’t look like the former President is willing to be very forthcoming.