Hunter Biden wants his financial records sealed. It seems he has some baby mama drama.

This is how things work for the liberal “elites.”

Get your illegal deals with the help of family, then seal the records. Ironically, Biden cites “fear of the media” as a reason to bury his dirty little secrets. Apparently, Biden is locked in a child support suit, and he hopes his claims of “significant debt” will help bail his butt out of a jamb.

Not surprisingly, Biden’s lawyers claim his financial information will cause him undue embarrassment, prejudice, annoyance or oppression. But maybe he should’ve said something more like “I plead the fifth.”

Because we all know his financial records have a good chance of further incriminating Biden in the Ukrainian Energy scandal.

Here’s the kicker. Biden claims he doesn’t even have the right information to give the court his financials. In fact, Biden’s statement will make you feel embarrassed for him.

‘In an effort to demonstrate to this court my good faith, I attest that I am unemployed and have had no monthly income since May 2019.’

That’s pretty funny. Of course, lots of high class criminals don’t hold jobs. That doesn’t mean they don’t have money. Perhaps Biden hid his millions so well, he just can’t put his finger on all his hiding places that fast.

Biden also hopes the court will force his baby mama to keep her mouth shut.

While Roberts and Biden continue to negotiate the specific terms of the order, should agreement be found, all financial information disclosed by both the defendant and plaintiff during the proceedings will remain entirely confidential.

In addition to preventing the disclosure of Biden’s alleged debts, the embargo will also block the release of any information regarding Biden’s business ventures, investments, expenses, taxes or personal property valuations.

Any physical copies of documents detailing finances of either party would be filed under seal and must later be returned or destroyed, and any digital documents would need to be securely stored on encrypted devices.

Failure to comply with such demands – filed in accordance with Rule 26(c) of the Arkansas Rules of Civil Procedure – would leave any guilty party liable to charges of contempt of court, which could result in hefty fines or even jail time.

Obviously Joe Biden’s womanizing rubbed off on his wayward son. Just look at the screenshot from when I googled the simple search “Hunter Biden accused.” 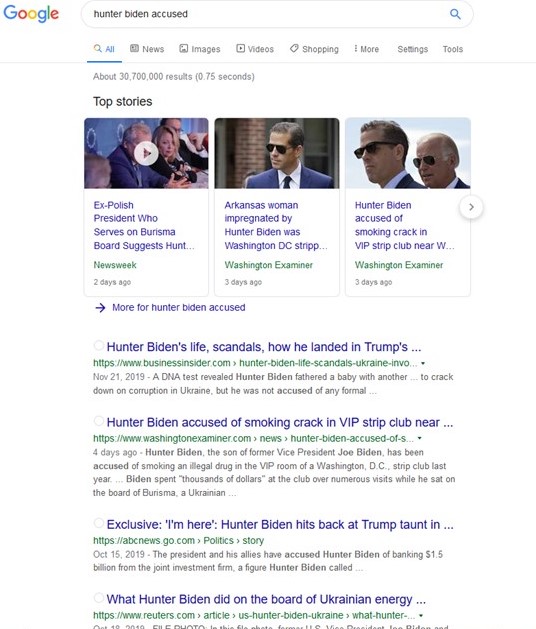 So many things immediately jump out! Biden caught with a stripper. Biden smoking crack. What Hunter Biden did on the board of Ukrainian Energy. Where do we even begin?

The Arkansas woman who was recently revealed by a court-ordered DNA test to given birth to a child father by Hunter Biden’s son was a stripper at a Washington, D.C., club.

Lunden Roberts, 28, worked as an exotic dancer at Mpire Club, near Dupont Circle, just blocks from the White House, where Biden, 49, was a regular, according to the New York Post. Biden, a former lobbyist who has struggled with drug and alcohol addiction, is the son of 2020 Democratic candidate Joe Biden, 77.

Around the time Roberts became pregnant with “Baby Doe” – the gender of the child was not revealed in court proceedings triggered by Hunter Biden’s refusal to admit paternity – Hunter Biden was dating Halle Biden, 44, the widow of his brother Beau, who died of brain cancer in 2015 at age 46.

Roberts used to perform under the stage name “Dallas.” She was working at the club at about the time she became pregnant with Biden’s child. Employees remember Dallas as “really sweet,” with one employee saying she has a “heart of gold and is a smarty-pants.”

The article goes on to pinpoint Biden’s drug use:

Mpire Club, where guests said Biden was “well-known,” is three blocks away from the club Archibald’s, a VIP club where Biden was accused of smoking crack last year while holding $50,000-a-month position on the board of Burisma, the Ukrainian natural gas firm that has been a key figure in the impeachment hearings against President Trump. Hunter Biden joined the board when his father was vice president and President Barack Obama’s “point man” on Ukraine.

Biden’s substance abuse appears to have started when he attended Georgetown University in the 1990s. He was in rehab in 2003. He relapsed in 2010. During his divorce from his first wife Kathleen after 23 years of marriage, she accused him in court documents of “spending extravagantly on his own interests (including drugs, alcohol, prostitutes, strip clubs, and gifts for women with whom he has sexual relations).”

The couple has three children: Naomi, 25, Finnegan, 19, and Maisy, 18. In 2014, he was dismissed from the Navy after he tested positive for cocaine, after receiving waivers on joining for a drug conviction when he was a teenager and for being over the age limit to be commissioned.

He admitted to using cocaine as recently as 2016, when he said purchased the drug from a homeless camp while staying in Los Angeles.

So now we have a first wife, a second wife and a baby mama? No wonder Creepy Joe is feeling a little upset.

The DNA results proving Hunter Biden’s relationship with Roberts were released last week. Former Vice President Joe Biden has distanced himself from his son while on the campaign trail. When asked about his newest, and sixth, grandchild, Joe Biden snapped back: “No. That’s a private matter. You’re a good man. You’re a good man. Classy.”

Hunter Biden might want to take a long hard look at his options. Because the deck is clearly stacked against him.

Biden’s made an enemy of Trump. Mistake number one. But you know what they say. Hell hath no fury like a woman scorned. And Hunter has three scorned women under his belt, that we know of. Any guy willing to steal his dead brother’s fiancé is likely to leave quite a few scorned women in his wake.

I predict these women start spilling the beans in the near future. If these ladies want Biden to pay the piper, they’ll have to hang his dirty laundry out to dry. Otherwise, he’ll get away with f-ing them all over again.