For those exploiting the Wuhan virus, you need to read this thread from the garbageman. While Leftists politicize this virus, this man puts it in perspective.

He calls himself Jester D. And he posted reality at ground level. He explains that he can’t work from home, because his job entails picking up America’s trash.

I’m a garbageman, I can’t work from home and my job is an essential city service that must get done. It’s a tough job, from getting up pre-dawn to the physical toll it takes on my body to the monotonous nature of the job, at times it’s hard to keep going. 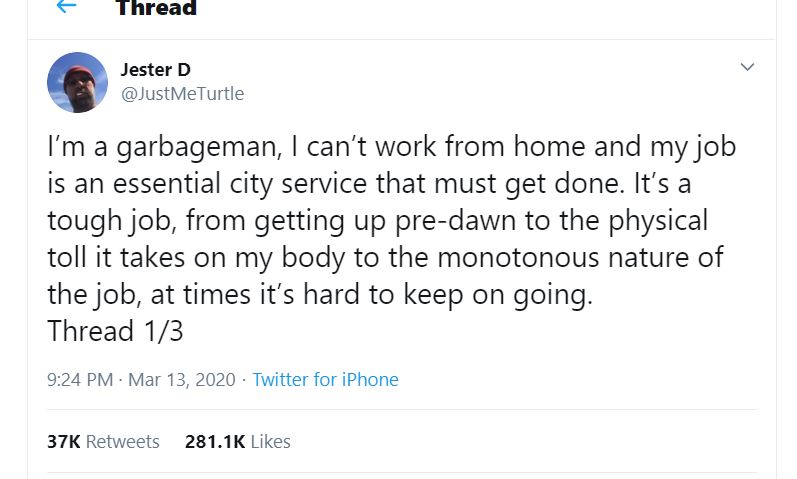 Right now though, right now I am feeling an extra sense of pride and purpose as I do my work. I see the people, my people, of my city, peeking out their windows at me. They’re scared, we’re scared. Scared but resilient. 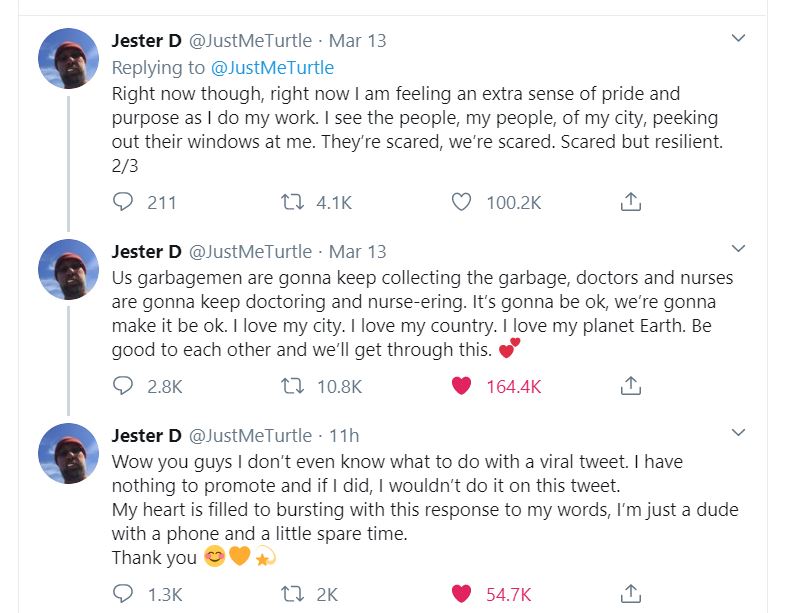 He obviously speaks of the quarantine the media motivated people to self-impose. But he can’t quarantine. What he does prevents disease.

Wow you guys I don’t even know what to do with a viral tweet. I have nothing to promote and if I did, I wouldn’t do it on this tweet. My heart is filled to bursting with this response to my word, I’m just a dude with a phone and a little spare time.

The humility of this man, coupled with his pride in his job amaze me.

Some people look down on jobs like this man has. But he’s keeping things in perspective. And that’s something a lot of people can’t seem to do during theses strange times of the COV-19 virus.

I recall a story about a world renown surgeon who hosted distinguished guests. When giving a tour of the hospital he and the group ran into the janitor. A black man, non-descript. He likely never thought of himself as much. After all, he was the janitor.

Upon seeing him, the distinguished surgeon introduced the janitor to the group as a member of his surgical team. He informed the group that without the services of this janitor, his job as a surgeon was much more difficult. He explained the role of a clean operating room and how valuable this janitor was to his and the hospital’s success.

If only the media took their jobs as seriously?