Like nearly every other human on the planet, I was appalled at the actions that led to the death of George Floyd.

It was a senseless tragedy created by a bully with a badge. Sadly, in every noble profession, a few bad apples threaten the integrity of the group.

For the most part, police are people who felt a calling to serve and protect. They wake up each day and put their lives on the line for the greater good. Throughout the Obama Administration, we saw a country embracing hatred towards our police force. Their lives were endanger more than ever.

When I first started working with Kevin Jackson, it seems every week we encountered another story of brutality against the police. I started waking up with statistics in my head. In fact, 135 officers died in the line of duty in 2016, which was the most in five years at the time. Eventually, our team put together a documentary called Bleeding Blue, which chronicles the war on cops. By 2019, that number fell to 89. Clearly, things started to simmer down under the leadership of Donald Trump. And then this happened.

George Floyd deserved to be arrested. But George Floyd didn’t deserve to die. Which is why many people aren’t satisfied with the response thus far.

The charge carries a potential prison sentence of up to 25 years in Minnesota.
Chauvin had been arrested and taken into custody earlier in the day, his arrested being initially announced by Public Safety Commissioner John Harrington.
Minnesota Sen. Amy Klobuchar (D) called his arrest the “first step towards justice.”

Chauvin was one of four officers fired on Tuesday after footage of Floyd’s arrest went viral.

Now, the entire country is outraged. Unfortunately, these bad apples are putting the entire police force at risk. As angry protesters are rioting in the streets, burning buildings down, our men/women in blue are working to hold it together.

I think it’s worth mentioning that social media platforms are flooded with police who are outraged by this incident. A friend of mine posted this. 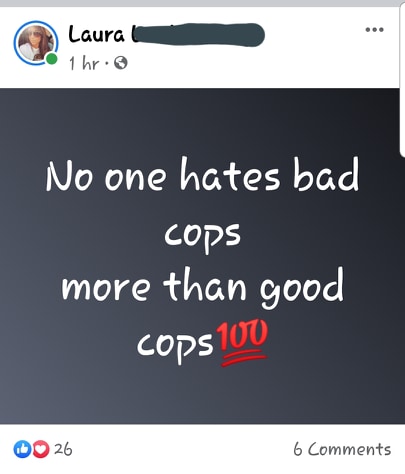 She’s afraid for her husband’s life and he steps out to serve our community. We’re 1,100 miles away, and there are threats against our local police force.

I’d personally like to know how rioting addresses this crisis? A Minneapolis police station was set on fire by angry protestors. So what happens to the next family that needs to dial 9-1-1?

According to the New York Times,

Early on Friday, officers in plastic face shields and carrying batons remained on some streets, which had largely cleared of protesters. Smoke rose on the city’s horizon. National Guard patrol vehicles were deployed, as firefighters worked nearby at the blackened shell of a building, still smoking, that housed a Family Dollar store.

Gov. Tim Walz of Minnesota said on Friday that he realized there was “no trust in many of our communities” but that order needed to be restored to “get the streets to a place where we can restore justice.”

Obviously, tensions are boiling over. Think about it. For months, people have been locked in their houses, scared to go to the grocery store. And isolation feeds anxiety. Suddenly, the first story to overtake coronavirus news is a senseless death at the hands of police. It’s no wonder the world is looking for the one to blame. But here’s the thing. We know who to blame. And it isn’t Donald Trump.

For starters, we need to blame Derek Chauvin. It was his knee that took Floyd’s life. Next, three officers failed to intervene. Thomas Lane, Tou Thao and J Alexander Kueng are those three officers. These four people are ultimately responsible for the events as they unfolded. Because no matter what, those four people used their free will to inflict pain and suffering beyond what was necessary to make an arrest.

But the buck doesn’t stop there. The Minneapolis police department received 18 complaints about Chauvin. Why was he still on patrol? And while we are asking questions, let me throw this one out there. Clearly there were people on the sidelines asking the police to stop using such force. They were making videos of the arrest. Why didn’t any of these people get on the phone and dial 9-1-1? It’s not like this happened in the blink of an eye. It was at least 8 minutes long.

Lastly, why is Minneapolis still allowing the knee-to-neck hold? Most police forces consider that excessive force. So, let’s be sure to dish some of the blame on the policies in place.

However, at no point did Donald Trump take part in the death of George Floyd.

Trump respects law enforcement. He’s worked to make their jobs easier. But he is also a president of the people. Consider how much Trump does to improve the black community. He’s implemented prison reform that aims to get non-violent criminals the rehabilitation they’ve always deserved. Further, Trump increased funding for HBCUs. And before this ridiculous pandemic, Trump pushed the black community to the lowest unemployment rates they’d ever seen.

Obviously, Trump was never branded a racist until he took on Hillary Clinton. Yet, today, social media is flooded with people trying to blame our president for Floyd’s death. Even in my own family!

My aunt shared a blog that was, for the most part, a moving commentary. So I commented, even though she and I are on opposite ends of the political spectrum.

This was her response: 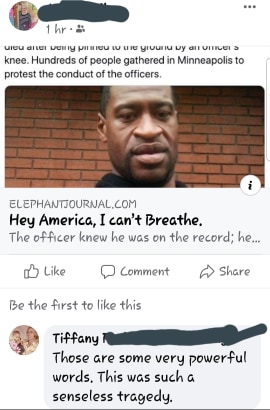 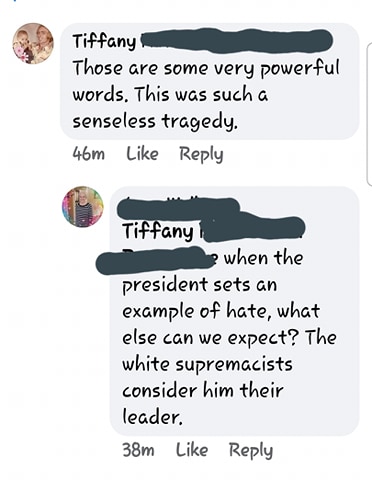 It’s sad to see people spreading hate-filled lies. Our president is not a racist. In fact, Trump already sent the National Guard to protect Minnesota since their local government failed to do so.

I can’t stand back & watch this happen to a great American City, Minneapolis. A total lack of leadership. Either the very weak Radical Left Mayor, Jacob Frey, get his act together and bring the City under control, or I will send in the National Guard & get the job done right….. 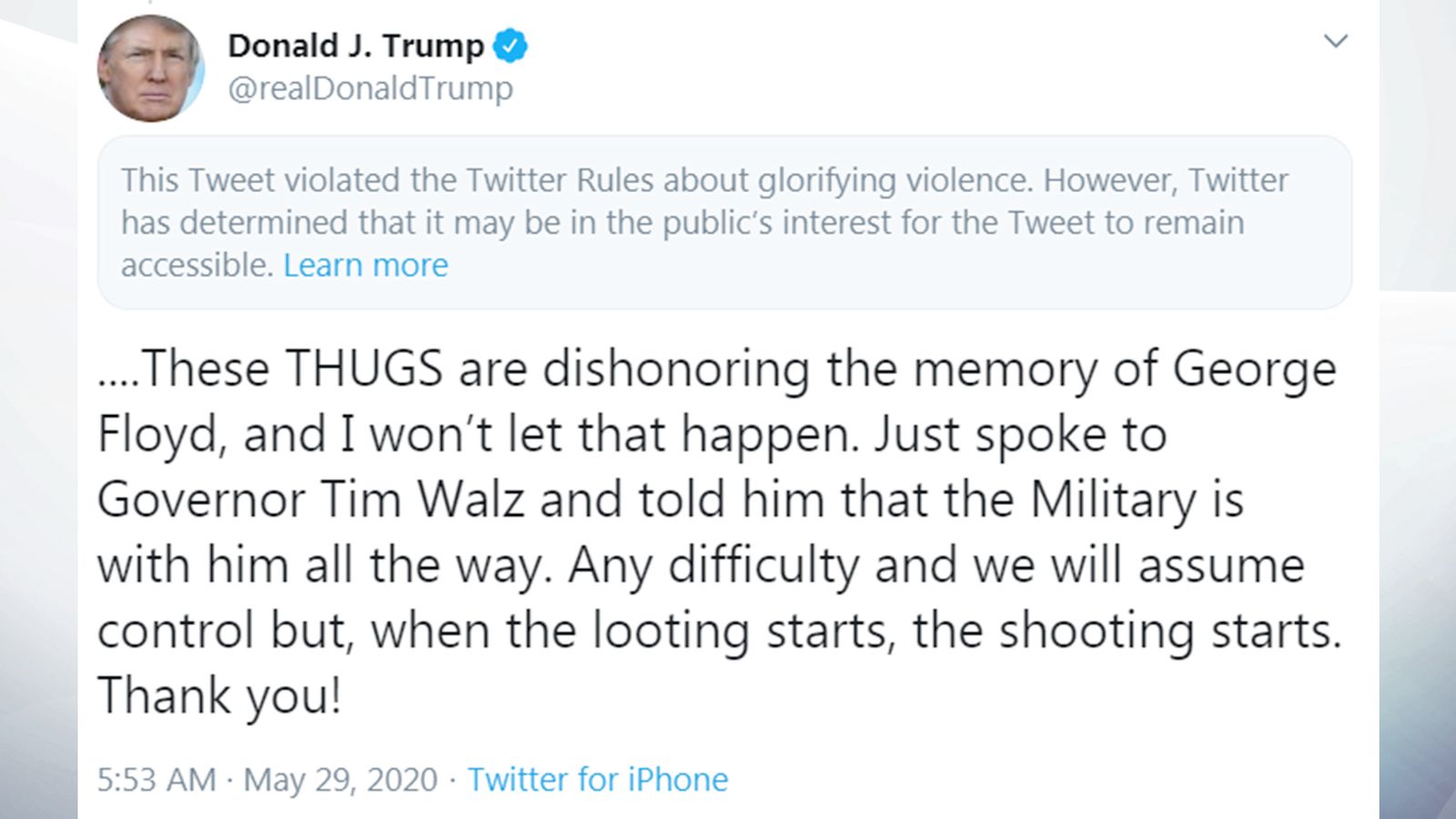 Instead of accepting the president’s leadership, leftists would rather say he glorified violence. But I’d rather go to sleep knowing my president is willing to step up to the plate than live in a land where leftists allow the country to fall apart because they’re too scared to make a bold move.

Looting leads to shooting, and that’s why a man was shot and killed in Minneapolis on Wednesday night – or look at what just happened in Louisville with 7 people shot. I don’t want this to happen, and that’s what the expression put out last night means….

Say what you will, but that doesn’t sound like a racist to me.