Gavin Newsom waged a war against the constitution, and so far, he’s winning.

But don’t take my word for it. Because it’s Newsom’s own words that paint him as a crazy man.

It was the sound byte heard around the world:

Few could have imagined that a throwaway line in a 2008 speech during the Proposition 8 maelstrom would be a harbinger of things to come. Governor Gavin Newsom is as close to a blue-blood aristocrat as California comes.

After his 2018 coronation, Newsom set upon a nonstop crusade to frequently defy the federal government.  However, like an autocrat, Newsom does not tolerate defiance within the confines of his realm.  Then, with the onset of the Coronavirus pandemic, Newsom knew this was an opportunity to seize, and then bragged about it.

California Gov. Gavin Newsom sees an “opportunity” to use the coronavirus outbreak to usher in new progressive policies in his state and elsewhere in the country, he said Wednesday.

The remark came near the end of a long, winding answer to a question about whether he saw “the potential” in the crisis for “a new progressive era” in state and national politics.

In the course of giving his answer, Newsom specifically referred to growing income inequality and a squeeze on the middle class as issues “we’ve long been struggling to address.”

In terms of the measures he’s taken to respond to the coronavirus so far, Newsom was among the first governors to issue a statewide shutdown in a bid to slow the spread, and he called on all states to do so.

Still, Newsom’s answer appears reminiscent of an infamous comment former Obama adviser and Chicago Mayor Rahm Emanuel made in a 2008 interview about the economic crisis with the Wall Street Journal: “You never want a serious crisis to go to waste. And what I mean by that, it’s an opportunity to do things that you think you could not do before.”

Emanuel repeated that remark again two weeks ago as lawmakers were mulling how to respond to the coronavirus crisis, although in a different context.

"We see this as an opportunity to reshape the way we do business and how we govern." pic.twitter.com/LongRVqcMS

At one point early in the coronavirus lockdown, Newsom even considered declaring martial law.  Instead settling for giving himself and the Chief Justice of the California State Supreme Court board unilateral powers to suspend any law.

To push his progressive agenda, Newsom is on record advocating “Reteaching Human Behavior“.  It’s a simple leap for an egomaniac to make who continuously misidentifies California as a ‘nation-state’:

On March 19th California became the first state to order a general lockdown, which came on the heels of the state’s first coronavirus death.  One of the more controversial moves, as part of the shutdown, was the order closing all small businesses and places of worship.  Many have argued that those draconian steps were necessary to protect everyone’s health.  Except there is one small caveat to that argument:  The violation of the First Amendment!

When America’s Founders created the Constitution, they implemented Lord Montesquieu’s ideals of a three-tiered government sharing power so that one political branch could not become more powerful than the others.  Even in Democrat-controlled Sacramento Newsom’s unilateral actions have drawn the ire of legislators from both parties.

Newsom has used his executive authority to shut down businesses, move local elections to vote-by-mail, accelerate spending on homeless shelters, alter court proceedings and provide benefits for essential workers. He’s signed 32 orders since March 4, when the state announced its first official death from the virus.

But state lawmakers who have been on recess for more than a month are starting to bristle at the governor’s seemingly unilateral decision making.

But like their constituents, lawmakers remain stuck at home in districts across California. The third branch of government — courts — has likewise shut down most activities for the time being. That leaves Newsom nearly alone to decide how to flex California laws in the coronavirus emergency.

Additionally, Article VI, Clause 2 solidifies that the US Constitution is the “supreme law of the land” and no laws or orders can supersede constitutional authority, as ruled in Marbury v. Madison.

A federal district judge earlier this month upheld Governor Newsom’s ‘shelter in place,’ ruling the order did not violate the Constitution.

Pastor Jonathan Duncan had continued to assemble his congregation after the governor banned public gatherings in March despite warnings it was in violation of state and local orders. The church of fewer than 50 members said it was obeying federal guidelines to prevent spread of the virus.

The church argued in its suit against Newsom, Lodi police and county health officials that the order was an abuse of power that criminalized communal worship while allowing people to frequent department stores, liquor stores, marijuana dispensaries and other businesses deemed essential.

The judge said that argument missed the point because shoppers were going to those businesses to purchase specific items, not to commune with each other. A more relevant comparison would be restaurants, concerts, movies and sporting events – secular places people gather that were also ordered closed.

Judge John Mendez said state and local stay-at-home orders were a valid exercise of emergency police powers and didn’t violate the church’s constitutional rights. Mendez noted that the Supreme Court over 100 years ago upheld the government’s right to exercise police powers to promote public safety during a public health crisis.

“During public health crises, new considerations come to bear, and government officials must ask whether even fundamental rights must give way to a deeper need to control the spread of infectious disease and protect the lives of society’s most vulnerable,” Mendez wrote.

TRANSLATION:  You cannot pray the way that you want “for your safety”, and thus the government can sweep aside the Constitutional rights like nuisance flies.

This is what has already happened:

Is the Constitution being violated?

Laws that restrict religious activity are much more likely to be held up in court if they aren’t perceived to single out religious expression, said Alan Brownstein, a constitutional law professor at UC Davis.

A law that bans giving alcohol to children could be applied to a Catholic church that wants to conduct communion with wine, he explained. A law that specifically bans Catholic communion would be unconstitutional.

Another reason a law might be seen to discriminate against religion is if it is chock-full of exceptions for secular activity, but not spiritual ones, he said.

Unfortunately, the notoriously liberal-leaning 9th Circuit Court of Appeals did not see it the same way.

A three-judge panel has just sided with Governor Newsom against constitutional rights.

The two judges in the majority wrote in their order, because in this case “constitutional standards that would normally govern our review of a Free Exercise claim should not be applied.”

“We’re dealing here with a highly contagious and often fatal disease for which there presently is no known cure. In the words of Justice Robert Jackson, if a “[c]ourt does not temper its doctrinaire logic with a little practical wisdom, it will convert the constitutional Bill of Rights into a suicide pact,’” they wrote.

He told the Fresno Bee:

There is a “next to zero” chance that any lawsuits challenging the state’s shelter order would be successful.

Opponents of the shelter order cite the Constitution, but Wanger said that part is tricky since protecting the “existence of our population” would cause the Constitution to have no precedent in the public health decisions by state governments. The Constitution grants state’s rights, which would prevent the president or the federal government from ordering nationwide orders or lifting state orders.

“To be candid, the Constitution is subordinated to the need to protect the public,” Wanger said.

When it comes to the debate over “essential” and “non-essential,” Wanger said, plaintiffs may be able to argue that the distinctions are arbitrary and that allowing some businesses to operate while others can’t does not protect the public.

But he added that, overall, the objective of the state’s shelter-in-place order is to protect health by ordering social distancing and other proper hygiene practices. Higher courts have not been able to overturn public health measures.

“That all has to stay in place,” said Wanger, who first appeared on KSEE-24’s Sunday Morning Matters. “Those issues are not going to be legally overturned.”

Backup On The Way!

Constitutionalists and Religious activists within California are getting a huge boost from President Trump and the US Justice Department.  This has prompted Governor Newsom to give an immediate impromptu response.

After receiving a formal warning from the United States Justice Department over church closures, California Gov. Gavin Newsom said his state is “weeks away” from allowing in-person religious services to resume.

On Thursday, Newsom told MSNBC’s Stephanie Ruhle that worshippers will be allowed back inside churches within weeks.

“I have deep faith and devotion to our churches, I grew up in the church and went to a Jesuit university and I have deep reverence for congregants and parishioners that want to reconnect with their community and to their faith and be able to practice accordingly,” Newsom said. “We’re just a few weeks away from meaningful modifications that will allow just that to happen.”

During a press conference Friday, Newsom said guidelines would be released Monday.

“We look forward to churches reopening in a safe and responsible manner,” he said. “We haven’t waited around for the federal recommendations in this space. [However], we take the issue very seriously and to heart.”

The “few weeks” timeline Newsom appears to be referring to is Stage 3 of his reopening plan, which allows for the return of “high-risk” businesses such as gyms, hair salons and other personal care services. Churches have always been classified as Stage 3 businesses, and Newsom stated Monday he believes the state will move into Stage 3 in early June.

However, a Stage 3 reopening for religious services is not what the Justice Department asked for.

During a crisis, regardless of the situation, is when the established rule of law is needed the most, and thus, should be well-guarded, otherwise they are just ‘permissions’.  It is the slippery slope our Founders feared, and a second branch of our government is giving in.

If these rulings are allowed to stand, it will embolden those looking to constrict constitutional rights at will and impose conformity at-will during any emergency!  Today it is Covid.

This must be appealed to the US Supreme Court, or we risk losing the Republic. 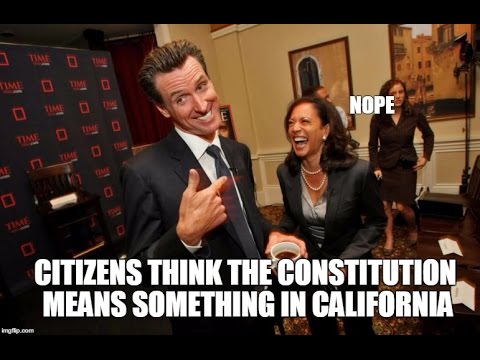