Glenn Beck joined an organized Republican coup against Donald Trump during the primaries.

In 2016, Beck called Trump an “immoral man who is absent decency or dignity.”

Adding to his future meal of crow, Beck even voted for Evan McMullin for president rather than vote for Trump.

Beck’s disdain for Trump at the time bordered on the spiritual, as he compared himself to the prophet Jeremiah. Take this snippet from his radio show when a caller suggested that supporting Trump is not Godly:

Beck said he’d been thinking a lot about the prophet Jeremiah, who vainly warned the Israelite kings that catastrophe was near. Finally, when the Babylonians were about to sack Jerusalem, Jeremiah urged the Israelites to accept national enslavement, because it was God’s will. Beck saw a contemporary lesson: “Sometimes you have to pay the price for what you’ve done.” Then he started talking about Donald Trump’s assault on the Bill of Rights.

Beck should have stayed in his lane. Leave theology to the theologians.

Beck’s problem for years has been only dabbling in areas of politics with no depth of knowledge. Beck’s lack of depth and schizo approach to topics led to his downfall.

I hasten to add that Beck helped me establish my TV career. Andrew Breitbart made me his “Beck guy”, and the rest is history.

After I did my first couple of hits on his show, Beck flew me to New York to be in studio. At that point he was consumed with black Conservatives. Later he got hooked on progressivism, as his producers pilfered my website for insight on the topic.

Beck eventually shifted attention to David Barton for more historical perspective on blacks and progressivism. By the time he left Fox News, he might as well have changed his name to Sybil, he had so many political personalities.

I remember thinking at the time, “Glenn doesn’t really know himself politically?” Thus, the constant searching.

That may be good for a teenager. But not for a grown man influencing millions of people. One must lead with clarity.

Rest assured, I’m not slamming Beck. I would say this to his face. I said it to his #2 at the time. Which is probably why Beck never tried to work with me.

Where is Beck now?

Climbing out of a hole. A deep hole. Going against Trump proved a career limiting move for many. Beck is lucky to survive at all.

I’m glad he’s still around. I’ve seen him twice at events where he’s given me his contact info. I write, but no answer. No harm, no foul for me. I could have helped him then and now. Not that he needs a savior. But if Beck had put me on his team 6 years ago, he would be large and in charge.

Regardless of how he got here, he’s done a 180. No more Trump Derangement Syndrome. Instead, Beck issued a multi-message apology to the Trump family.

I am feeling so humbled this week. And I feel truly horrible for the things I said and believed in 2016 about @realDonaldTrump. I believed the worst politically, which he proved me wrong at almost every turn. in the most dramatic cases (life/Israel/China/authoritarian) cont 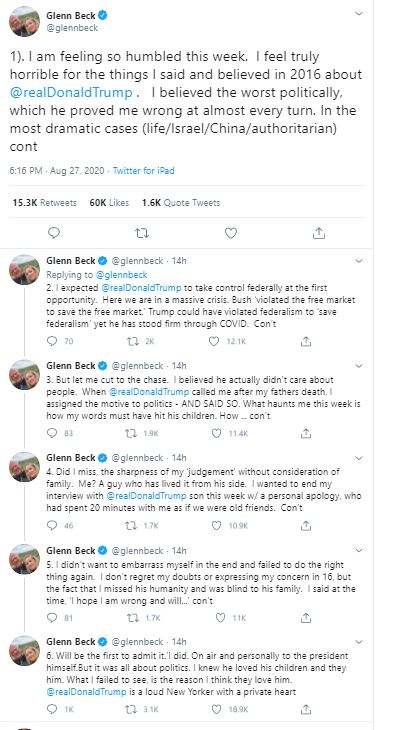 Beck next compliments President Trump in his handling of Wuflu. He admits that Trump was not the “federalist” Beck thought him to be; quite the opposite in fact.

You can read the other mea culpas for yourself. But what I take from Beck’s admission is how closed-minded he was about Donald Trump.

I literally discussed this on my radio show the other day. I said that Trump has converted more naysayers that any president. And we don’t even have the full count yet. But November 3rd should give us a pretty good idea.